Consolidation in New Zealand’s residential construction industry has resumed since 2011 as building activity has recovered from the Global Financial Crisis. In 2017, the 100 largest firms made up almost 40% of consents, although that figure slipped to 37% in the March 2018 year. We had expected this trend of consolidation to take place, but it contrasts with a declining market share for the top 100 firms in Australia. Does this apparent fragmentation of the market in Australia foreshadow a similar change for New Zealand?

The structure of the residential construction sector has changed significantly over the last 20 years. We first looked at the trend towards volumes builders in New Zealand back in 2006 [1] and most recently updated that analysis in 2013. [2] 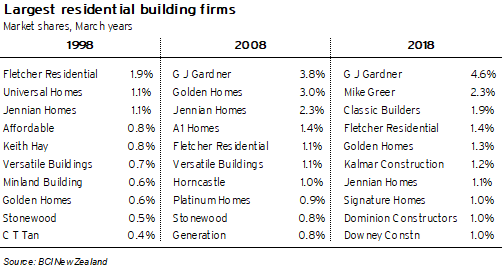 Data from BCI New Zealand in Table 1 shows that the biggest single firm in the residential construction sector in the March 1998 year was Fletcher Residential, representing just 1.9% of the overall market as measured by new dwelling consents. Universal Homes and Jennian Homes were the only other companies with a market share of over 1.0% in 1998, and the 100 largest firms comprised only 22.8% of the market.

The next three years were unusual, given previous experience that showed the market share of the largest firms tended to increase when overall levels of activity were shrinking. But the GFC hit the entire industry hard, and the top 100’s market share had slipped to 33.2% by 2011. Even so, this figure was still higher than at any time between 1997 (when our data starts) and 2006.

Our previous articles have highlighted some of the factors behind the industry’s consolidation over the last 20 years.

Furthermore, growing numbers of apartments and, in recent years, townhouses are symptomatic of larger-scale developments being undertaken by single firms. For example, a company that constructs a 40-unit apartment block each year will find itself comfortably within the 100 largest residential building firms.

Australia can often provide a good guide for future trends in construction in New Zealand. In 2006, the market share of Australia’s 100 largest residential builders was 40.3% and set the benchmark for where we thought the New Zealand figure might head. The increased share of the top 100 firms in New Zealand since 2006 has proven that expectation to be correct.

However, by June 2016, the top 100 Australian firms represented just 29.8% of the market across the Tasman (see Graph 5). Although Australia’s top 100 have largely maintained their share of detached houses since 2006, the 147% lift in the number of attached dwellings being built between 2006 and 2016 has opened the door to a raft of new mid-sized developers. These firms are likely to concentrate on one or two projects at a time. The result seems to be an increasing number of construction firms coming into the industry, possibly from the light commercial construction space. Although these firms don’t end up making the top 100, they are still building a significant number of new dwelling units each year.

The smaller overall size of New Zealand’s residential construction industry means that an intensive housing development of almost any magnitude would propel a firm into the top 100 builders in the country. The cut-off to make the top 100 in 2016/17 was a record high of 30 consents, but it was as low as 11 consents in 2008/09.

Auckland will follow the Australian trend of growth in construction of attached units as densification occurs. We believe this trend will reinforce the New Zealand industry’s drift towards larger firms, as well as potentially demanding a different skill set of its workers – particularly for apartment buildings, where construction methods are more akin to commercial building than residential building.

In our view, the trend of consolidation in the residential construction industry provides opportunities for efficiency and productivity gains and cost savings for consumers. It also presents possible challenges for materials manufacturers and suppliers as the number of potential customers shrinks and each individual client becomes more important.

[3] “Owner builders” (see Graph 1) are defined as builders of a single dwelling in a 12-month period that have not been identified as commercial builders.