For the first time, the value of international education has been measured in eight regions around New Zealand in a series of reports authored by Infometrics Chief Economist Adolf Stroombergen and the National Research Bureau (NRB) for Education New Zealand.

In this article, I examine the regional impact of international education on two close, but very different areas in the Otago region; Dunedin City with its vibrant student presence and world class University, and Queenstown-Lakes District, the ‘Adventure Capital of New Zealand’. I then l look to the future to see how regional economies can leverage potential growth in the industry.

Who benefits from international students?

International education is the fourth-largest earner of international export revenue for New Zealand, generating more than $4.0 billion in 2015/16. However, the value of foreign students extends beyond the main centres of Auckland, Christchurch, and Wellington.

Smaller regions and districts around New Zealand are also reaping the benefits of having international students and this is having a considerable impact on their local economies.

The eight regions covered include:  Northland, Bay of Plenty (including Tauranga and Rotorua), Taranaki, Manawatu-Whanganui, Hawke’s Bay, Nelson Marlborough, Otago (including Dunedin and Queenstown) and Southland. Each regional report looks at international student costs and breaks these into course fees and living costs, with most value generated by the latter.  Additionally, the number of jobs the industry supports in the region directly and indirectly was estimated.

The two charts below provide a summary of international student numbers and their value add in the eight regions focused on.

2.0% of Dunedin’s GDP can be attributed to international education

Of the eight regions measured, the Otago region came out on top in terms of total foreign exchange earnings at $174m in 2015/16, followed by Bay of Plenty at $118m and Manawatu-Whanganui at $100m.

The Otago report breaks the region down into Dunedin City and Queenstown-lakes District. The report estimates that international education accounts for about 1.5% of GDP, below the national average of 1.7%. However, the industry’s contribution of Dunedin’s GDP was 2.0% in 2015/16, unsurprising given the city is home to Otago University and the Otago Polytechnic.

At $136m, the total value of the international education sector to Dunedin’s economy and future growth potential is substantial. On average, each student spent $33,000 in 2015/16 and was the highest measured, largely owing to the relative size of its university sector and the associated higher fees universities attract. Dunedin’s overall education and training sector was the fourth largest in New Zealand in 2016 across all territorial authorities, accounting for 13% of all jobs in city.

Notably, while employment in education and training has been relatively flat in the Dunedin over the past few years, employment in the industry in Queenstown has grown between 4.2% and 14%pa over the last 10-years, albeit off a low base of 471 in 2006.  This growth is largely the result of private training establishments (PTEs), such as the Queenstown Resort College setting up in the area, targeting international students and growing.  The Southern Institute of Technology and Otago Polytechnic have also increased their presence in the area. The international education sector in the Queenstown-Lakes District is relatively small, sitting at 1.1% of GDP. Nevertheless, the sector is likely to grow.

Queenstown has a fraction of the education providers that other cities have, but the district has grown in popularity, driven by a unique lifestyle proposition that includes beautiful surroundings, and opportunities to go skiing, biking, and hiking right at the city’s doorstep. In 2015/14, there were 1,280 international students, who contributed over $25,257m to the local economy.

Study Queenstown and Destination Queenstown, who are education and tourism marketing bodies, aim to have 5,000 students studying in Queenstown by 2025. However, limiting future growth is Queenstown’s already constrained housing market and sky rocketing rents. 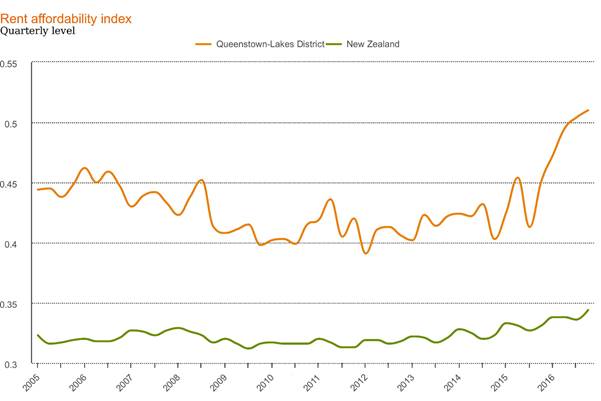 The international education sector globally is set to grow due to rising demand for qualifications around the world. The big question is will New Zealand and its regions get a fair share of this global growth?

The industry in New Zealand ballooned in late 2014 and 2015 after change in working rights allowed students to study full time during study breaks, effectively bringing offshore study within the budgets of more people. Although the sector has tightened in the wake of reports of student visa fraud and rogue agents, rising levels of incomes and population in developing countries will support continued growth going forward, and despite many allegations centred around Indian students, this cohort is picked to be the top growth contributor.

Leveraging the future demand growth for international students is a large and, in some cases, untapped opportunity for districts and regions around New Zealand. But to attract students who could have a considerable impact on their local economy, New Zealand’s regions need to be competitive. Attracting students is often not all about having world class education programs, but the entire experience.  These factors include: access to amenities, programmes catered to international students, and things for the students to do, something Queenstown excels in. When making economic development decisions, councils and those involved in the education sector should consider catering programmes to international students in a way that helps maximise the impact they have on their regional economy.