Home > News > The plight of the cow

When we talk about the dairy industry in New Zealand, we tend to focus on how farmers are going, however, we rarely stop to think about the plight of the cows they milk.  Over the past decade, these dairy cows have become increasingly indebted and the number of other cows they are forced to share paddocks with has also increased.  This article examines how dairy cows have responded to these conditions, and if their underlying financial positions compensate them for all of their hard work.

The average dairy cow had around $6,600 of debt as of June 2012.  Furthermore, this debt level has increased substantially over the past few years.  Using Fonterra’s milk pay-out price to proxy changes in cows’ real ability to service debt shows us that the average cow’s debt levels had climbed 37% by June 2012 from a recent low of $4,800 per cow in 2004.

Surely this level of indebtedness is keeping cows awake at night worrying.  To put things in perspective, if we divided the total value of outstanding personal loans in New Zealand by every man, woman, and child, we would have only got a figure of $2,900 of personal loans per human as of June 2012. 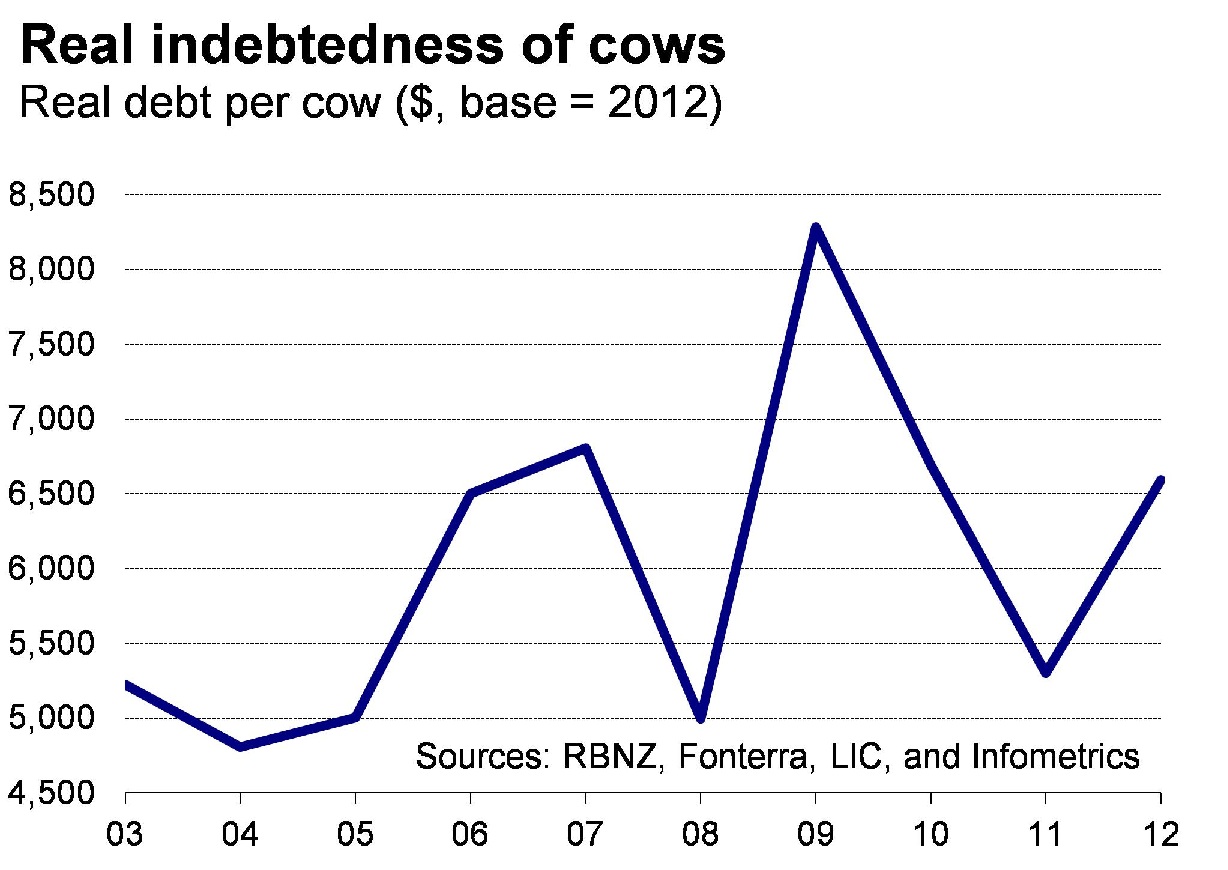 And that’s not all.  Not only have cows’ debt levels grown, but as land values increased, farmers have sought to boost their returns by packing in more and more cows onto our dairy farms.  In 2012, there were 2.83 cows sharing each hectare on New Zealand’s dairy farms, compared to less than 2.50 cows per hectare in the mid-1990s.  To put these cramped living conditions in perspective, there are currently only a paltry 0.02 humans sharing each hectare of the rest of New Zealand (excluding the land taken up by the cows).

The benefits of social support

One could easily form spurious conclusions regarding dairy cow welfare on the basis of high debt levels and confined living quarters.  However, before one does, bear in mind that dairy farmers have the incentive to show their cows some TLC from time to time.  It would be a complete and udder shame to ignore this dimension.

To mitigate the effects of intensification, and in the interests of good animal husbandry, dairy cows are provided with an extensive social support structure.  For example, in 2012, health care spending amounted to an average of $82 per cow, supplementary feed was around $371 per cow, fertiliser and lime spending was about $194 per cow, while $8 per cow was spent on water charges for irrigation.  This spending was on top of net investment into new and existing farm infrastructure of $183 per cow.

As would be expected, cows respond favourably to this type of nourishment and the improved living environment that comes with better infrastructure. For want of a better indicator, let’s measure cows’ welfare by their productivity.  After all, cold-minded capitalist logic surely tells us that, if cows are happy and healthy, their contentedness will show through in the work they do.

Productivity statistics show us that the average quantity of milk solids produced per dairy cow each season has risen from well under 300kg/cow before 2000 to a peak of 364kg/cow in the 2012 dairy season.  The revenue from milk sold by these cows totalled just over $2,500/cow (including dividends from Fonterra’s production) in the 2012 season and, after expenses, the average dairy farm’s net profit (after tax) amounted to $485 per cow. 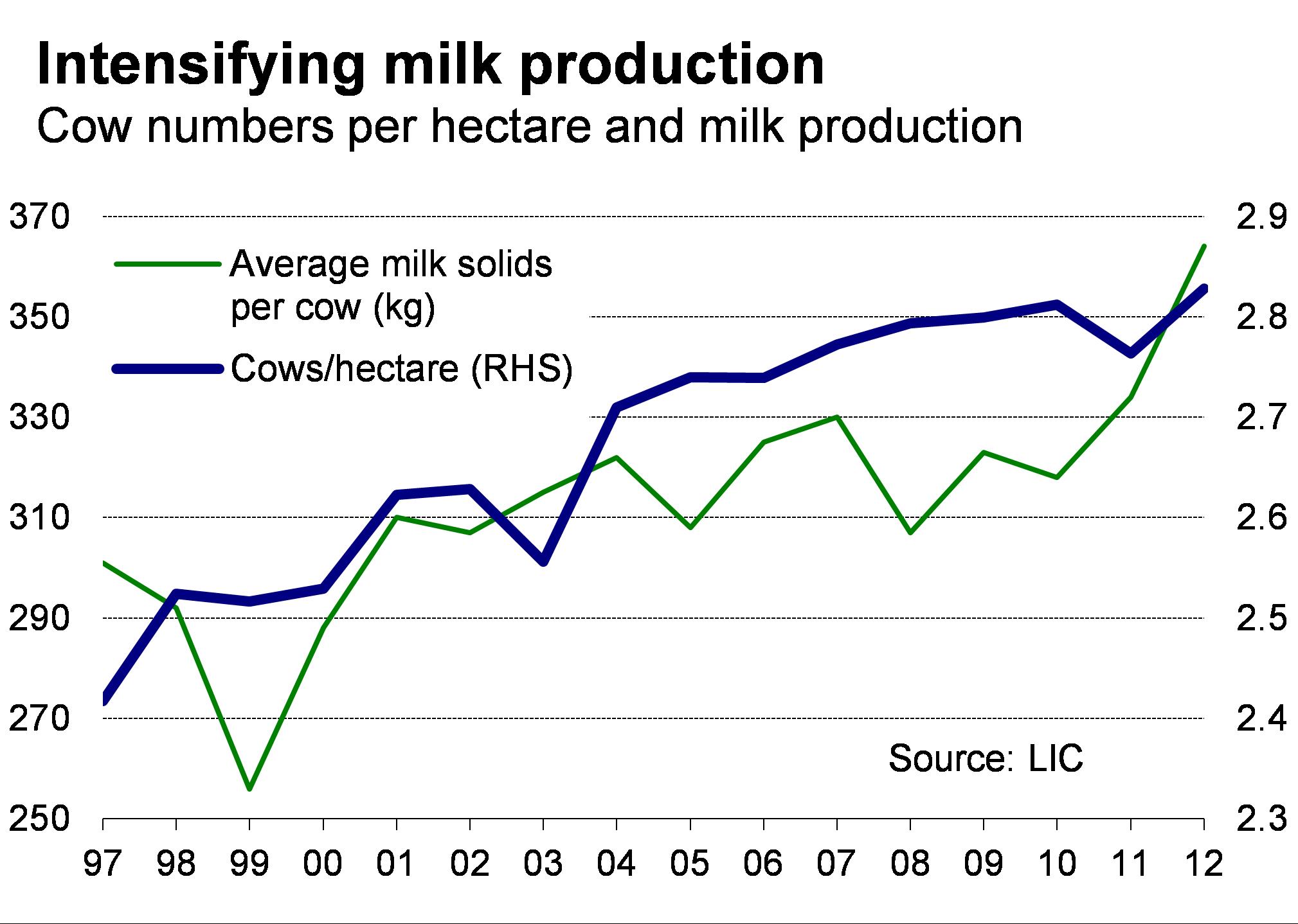 Furthermore, a quick glance at dairy farm balance sheets shows that, despite high debt levels, the average cow still enjoys a healthy equity position.  As of June 2012, each cow’s $6,600 of debt compared to $17,000 of assets.  This left each cow with $10,400 of equity, or an equity ratio of 61%.  Of course, this financial position does not come without risks and, bearing in mind that cows are notoriously risk adverse creatures, it would be amiss to not briefly deal with this issue.

An obvious and topical risk stems from drought.  These types of climatic events cause problems not only by reducing underlying milk production, but also by increasing expenditure on items such as animal health and supplementary feed.  Setting aside an adequate cash buffer and investing in water and feed storage can help mitigate these risks.

Another significant short-term risk to consider is the prospect of interest rate increases from 2014.  Any increases to interest rates will erode farm profitability.  However, restrained growth in loans to the dairy sector over the past season shows that cows have already begun mitigating this risk by limiting new exposure to debt.

A further risk stems from the property market, given that $12,500 of each cow’s assets is tied up in farm and building assets.  This risk is ultimately tied to the outlook for commodity prices because farm prices reflect expected farm returns, which in turn depend on underlying expectations of milk pay-outs.  However, thankfully the outlook for milk prices remains good, due to rapidly growing demand in the developing world for milk proteins, and New Zealand’s relatively low-cost system of pastoral-based dairy farming,.  As a result, the downside risk to farm prices from this factor is minimal.

Upon balancing these risk factors, against healthy equity positions and the potential for further productivity gains, it seems that our dairy cows are in a sweet spot.   Far from being poor unfortunate creatures, whom we have saddled with debt and crammed into fields, New Zealand’s dairy cows are highly productive specimens of Darwinian success in action.