Home > News > Will a cut in migration choke the provinces?

The new government seeks to reduce migration from its record breaking highs. It also has a strong focus on regional development as many regions face declining population. However, it faces a mighty challenge to reconcile these two policies which could work against each other.

Strong migration has boosted the regions

The provinces have enjoyed a population bonanza over the last few years from high international migration into New Zealand. We consequently hear a lot less about “zombie towns’, a term coined to describe dying rural towns.

Most migrants to New Zealand choose to settle in the major centres but as net migration has ramped up over the last few years an increasing number have been settling in the regions. They are attracted by lower house prices, less congestion and country living.

Recent years of strong international migration have seen many struggling districts enjoy a resurgence in population. Ruapehu District had experienced 13 straight years of population decline but in 2017 enjoyed growth of 1.6%, supported by a big increase in international migration. Other districts showing a similar resurgence include Kawarau, Waitomo, Hauraki, South Waikato and Otorohanga. 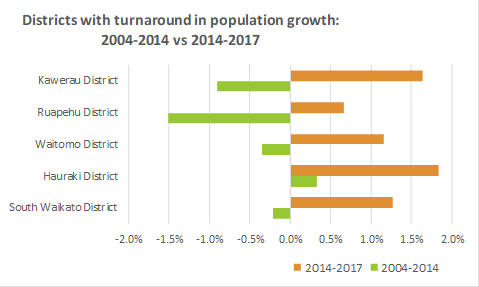 The new governments will to reduce population growth is well founded

While the regions have enjoyed a population top-up over the past few years it is the major centres that have borne the brunt of record population growth. High net migration has seen the major centres struggle with congestion, overburdened infrastructure and skyrocketing house prices.

…as is the focus on regional development

While seeking to bring down international migration the new government also has a strong focus on regional development. A focus on the regions is crucial as up to two thirds of districts face declining or stagnating populations over the next 30 years. Districts with declining populations will struggle to fund the maintenance of their ageing infrastructure.

The core of the new administrations’ regional plan is the $1 billion-a-year Regional Development Fund which was established as part of the Labour-NZ First coalition agreement. While the details of this fund are scant the money will be spent on regional rail, planting trees, investigating the feasibility of moving Port of Auckland, and other large-scale capital projects.

…but are they mutually compatible?

These big projects should provide a stimulus to the regions. But reducing migration can potentially cut off a supply of much needed population growth and economic stimulus to the provinces. It is going to be a difficult path for the government to balance a slowdown of migrants and achieve the regional growth to which they aspire.