In 2012, the Living Wage Aotearoa New Zealand movement1 commissioned a report on a living wage.  As this movement gathered momentum, there has been a social push for minimum wages hikes – something a number of government parties brought into their pre-election policies.  This article will look into the industries most affected by minimum wage increases and analyse likely business responses over the short and medium term.

The purpose of a minimum wage

Putting a minimum price on most production inputs may seem strange.  However, under our current tax-benefit system, the price setting conditions for labour often swing in favour of employers – especially for low-skilled jobs.  The justification for a minimum wage is to fight the exploitation of those with the weakest bargaining power in wage negotiation.

When someone has limited labour market experience or education, and also has very little in the way of savings or community support, they may be desperate to work just to survive.  In this case, the bargaining power in the labour market falls strongly in the favour of potential employers, and the employee might get paid very little for doing a task.

This imbalance of power in wage negotiation can undermine the whole wage negotiation system. Even job applicants who recognise the value of their output will be undercut by those who are willing to accept a lower wage for the same value of work.  As a result, putting a floor under the price of labour both limits the extent that prospective employees can under-sell their effort and restricts the extent that applicants can be undercut by others competing for the position.

In this case, if an employer puts a higher value on the work than they actually pay, all a minimum wage does is take some of the difference (gained by the employer due to their strong bargaining position) and gives it back to the employee.

An over-valued wage is a transfer of value from the employer to the employee, undermining profit and capital investment.

However, if the minimum wage gets too high it starts to have other effects.  In 2011, the New Zealand adult minimum wage was about 60% of median earnings for full-time workers – a proportion that is one of the highest in the OECD2.  If the minimum wage is set higher than the value of output from some types of workers, these workers will start to be excluded from the labour market.  This often affects those whose productivity is inhibited by a physical or mental disability, or those who have other social responsibilities that make them less available for work.  Higher minimum wages can force firms to be more selective, and thus further marginalise groups in society.

Lastly, if a firm has enough market power to pass the costs of a minimum wage hike on to customers, then any lift in minimum wages will be negated by a lift in prices.

This combination of potential effects – reduction in profitability, cutting output and costs (specifically by letting go of “low-value” employees), and high prices for customers – form the trinity of effects of a higher minimum wage.

The higher the minimum wage gets, the less that firms will eat into their bottom line, and the more likely they will cut output (and employment) and/or lift prices.  Currently, the minimum wage in New Zealand is set with this fine balancing act in mind.

In light of the living wage movement, The Treasury has investigated the likely effect of an increase in minimum wages to $18.40 being adopted by employers in New Zealand.  The Treasury’s 2013 report largely focuses on the financial effects of a living wage on employees, but also identifies which industries are most affected by a lift in the wages for low-paid employees.  The industries most susceptible to changes in the minimum wage are shown in Graph 5.13.

There are three core industries that have a significant proportion of their workers earning at or near the minimum wage4. In 2013, 54% of accommodation and food industry employees were earning between $13.75/hr and $15/hr.  Other industries with a high percentage of workers in the sub-$15/hr wage bracket were wholesale and retail trade (38%) and healthcare and social assistance (25%).  These industries will be the most susceptible to future minimum wage hikes.

In contrast, industries with the smallest proportion of workers in this wage bracket were education and training (12%), construction (9.6%), along with professional, science, and technology services (5.4%).

The minimum wage trinity in action

Higher minimum wages often result in some combination of the below responses.

Once the fifth Labour government came into power, it ensured that the minimum wage increased slightly more quickly than average wages.  With the economy running hot, and domestic demand elevated, it is likely that the effect on employment was minimal.  However, to date there has been no research examining whether the higher minimum wage was paid out of firms’ profits, or whether it helped to drive the strong non-tradable price growth that was associated with the mid-2000s.

As we mention in What is going on with the labour market recovery?, employment as a share of total employment in the retail (including accommodation and food services) and manufacturing sectors has fallen significantly from before the Global Financial Crisis.  It is possible that the high level of the minimum wage is one of the causes of New Zealand’s prolonged higher unemployment rates post-recession, and may be having real disemployment effects.

The three industries most affected by minimum wage hikes (accommodation and food, retail and wholesale trade, and healthcare and social services) accounted for 31% of employment in New Zealand in the June 2014 year.  Applying the proportion of those employed in the $13.75-$15.00/hr wage bracket shows that around 260,000 people across these three industries alone are directly affected by wage increases.

It is important to note here that healthcare and social assistance providers are largely publicly owned.  As a result, the trinity of trade-offs only loosely applies when minimum wages are increased – the government can just offset higher wage expenses with more tax revenue. 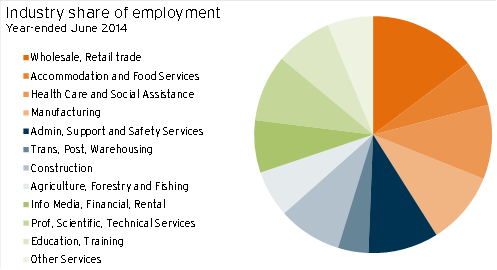 Both qualitative and quantitative analysis suggests that firms tend to absorb the increase in cost of small to moderate minimum wage hikes in the short-term, before building it into price increases over the next year.  If the wage increases are more significant, businesses reduce employment hours and casualise more of their workforce as well.

These responses are most stark in the case of The Warehouse which, as a component of the wholesale and retail sector, has an estimated 38% of employees earning at or just above the minimum wage.  From 2005-2008, minimum wages rose 14%, while the share of revenue spent on wages and salaries remained unchanged. The increases in minimum wages during this time were moderate (25-50c a time), and therefore much easier for the company to compensate with price increases over the following year.

However, the 17% lift in minimum wages (a $1.75 increase) in April 2008 was too steep to fully build into product prices over the following year, forcing company profits to bear the brunt of the increase in costs.  In The Warehouse’s August 2009 financial year, employee remuneration for those earning under $100,000pa spiked 9.6%, even though the company cut the number of full-time equivalent employees by 5.5%.  Adding these wage hikes to deteriorating economic conditions saw The Warehouse’s retained profits contract to just 0.7% of revenue (down from 2.7% in 2008).

Even though the total number of employees went up by 2.3%, full-time equivalent employment continued to shrink in 2010, falling a further 5.1%).  Cumulatively over the 2008-2010 period, the proportion of FTEs dropped from 66% to 60% of total employees.  These changes suggest that when threatened with unsustainably low profit margins, the company heavily reduced employee hours and casualised more of its workforce.

To say that the lift in minimum wages was solely responsible for the reduction in employment around this period would be an unjust conclusion, as the year to August 2009 was the first full year following the collapse of Lehman Brothers and the start of the Global Financial Crisis.  The sharp drop in domestic demand associated with this event strongly limited The Warehouse’s ability to pass on cost increases.  This event occurring in conjunction with a sharp minimum wage hike helps to explain why FTE numbers had to be cut.

The three most at-risk industries5 accounted for 18% of national GDP in the year to June 2014.  However, these industries are a more prominent part of some regions’ GDP than in others.  Regions most affected by a strong hike in the minimum wage are likely to have a high percentage of GDP generated by these three industries (weighted by the proportion of minimum wage earners within each industry).  Table 5.2 ranks each region by these factors.

Nelson ranks highest due to its disproportionate share of healthcare and social assistance services6 and elevated employment in wholesale and retail trade.  Auckland trumps Manawatu-Wanganui because more of its GDP is generated in the retail and wholesale trading sector, where the proportion of those earning at or around the minimum wage is 38%7.  In Taranaki, with just 8.8% of GDP generated by the three most at-risk sectors combined, economic activity is likely to be least affected by minimum wage increases. 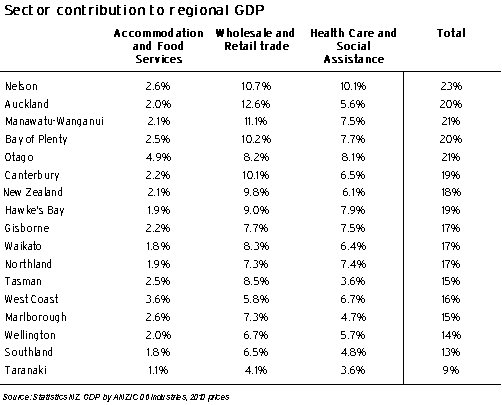 With a large proportion of workers earning at or close to the minimum wage in the retail and wholesale trade, accommodation and food, and healthcare and social services industries, these are the industries that will face the brunt of any minimum wage increases.

Research from the Department of Labour and an investigation into The Warehouse suggest that employers respond to different-sized wage hikes differently.  The larger the wage hike, the more difficult it is to build the cost increase into higher prices without a backlash from customers.  As a result, employers are more likely to cut employee numbers in response to sharper increases to minimum wages.

Given the 50c raise in April 2014 and the re-election of a National-led government, the likelihood of a strong minimum wage hike in the near term is relatively small.  However, if recent history is anything to go by, small to moderate minimum wage hikes are still likely throughout the next term of government.

Even so, the already high level of the minimum wage puts firms in the most at-risk industries in a compromising position.  Exiting a recession, firms are aiming to restore their profit margins, rebuild capital investment, and begin expanding output again.  These aims become increasingly difficult if businesses have to continually sacrifice profit and employee work hours for wage increases.  And with average wages growing at 2.5%pa in June, any more than a 36c increase in the minimum wage would push the price of low-waged labour up faster than customers’ incomes.  Passing the full cost of a minimum wage hike on to the customer could hurt overall sales revenues, as customers baulk at “unjustifiably high” prices.  In a climate where the economy is not quite running at full steam, any lift to minimum wages will ultimately detract from a firm’s ability to build its way back to sustainable profits.

1 At that stage, known as the Living Wage Campaign.

3 All remaining workers in the industries are self-employed, non-wage earners.

5 Accommodation and food, retail and wholesale trade, and healthcare and social services.

6 However, Nelson may not be the most affected region, as publicly owned healthcare and social service providers often have the option of drawing from public funding to support an increase in wage costs.