Infometrics uses seasonally adjusted data to gauge month-to-month trends in car registrations.  The purpose of doing so is to track whether there are any changes in momentum in car sales growth.  It also helps us to look through the seasonal patterns that normally drive sales up or down in any given month.  Examples of a regular seasonal pattern include strong growth in new car sales due to rental car purchases in October and November, or the lift in sales around the time of Fieldays in June.

There are a few different ways in which we can track trends in car sales data:

2.       Comparing months or quarters to the same period a year earlier

All these processes allow us to “look through” seasonal trends and track the overall growth in the data, but each have their limitations.

The limitation to the first option is that it is slow moving – it takes several months for any change in the trend to become apparent in the data.  In other words, because annual data looks at the whole year, it might not pick up emerging weakness in car sales if the first 6-9 months of the year were strong.

Using seasonally adjusted data as in option three, we remove the seasonal effects to allow us to compare between any two periods of time.  Perhaps we want to compare the June quarter to the March quarter.  With seasonally adjusted data we can do this without having to try and make a subjective allowance for the lift in sales that normally happens in the June quarter due to sales at Fieldays.

How do we calculate the seasonally adjusted data?

Ideally, this process would result in the trend line as depicted in Figure 1, from which we can measure growth over any period we choose and know that it represented the true (seasonally adjusted) change in underlying sales activity.  However, in reality the random factors are still included in the seasonally adjusted series.  As a result, we must exercise caution when interpreting data on a month-to-month basis. 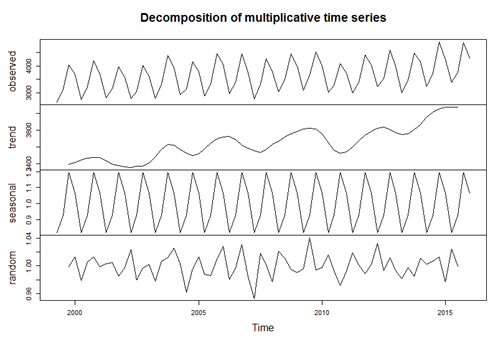