Time for a pre-emptive strike on inflation

The Reserve Bank should pre-empt a build-up in inflation by raising interest rates next week.  Although demand pressures are on the rise, the real problem is that New Zealand has entrenched high inflation expectations and a wide-spread cost-plus mentality that threatens to undermine the effective implementation of monetary policy if the Bank is too slow in reacting to the current build-up in inflation pressures.

In a paper that I presented to the New Zealand Association of Economists conference in 2006, I demonstrated that demand factors were way less important in explaining inflation outcomes in New Zealand than inflation expectations and inertia.

The most important element is inertia, which represents the impact of formal and informal rules that ensure that past inflation feeds into future inflation.  Examples of this inertia are wage demands that are influenced by past inflation outcomes and businesses increasing prices to compensate for past cost increases.  A high degree of inflation inertia implies the widespread presence of rigid compensation rules and/or the absence of competitive pressures that limit the ability of firms to pass on cost increases to customers.  My analysis indicated that 74% of inflation outcomes between 1990 and 2005 could be attributed to inertia, 20% to inflation expectations and just 6% to imbalances between supply and demand.

The popular view that monetary policy controls inflation by constraining economic demand is a partial and over-simplistic view of how monetary policy operates.  Tight monetary conditions do constrain economic demand, which in turn will typically make it more difficult for firms to raise prices without risking a large loss of customers.  However, the results of my paper suggest that there are limited ongoing effects of demand management on inflation.  In the absence of other transmission paths, inflation pressures will typically mount quickly again once monetary policy eases. What is critical for the success of monetary policy is credibility, both in terms of resolve by the Bank to continue resisting inflation pressures, and the belief by society that the Bank does hold this resolve.  This need for credibility explains the importance of the 1989 Reserve Bank Act in helping the Bank change New Zealand from its pre-1990 high inflation environment into the post-1990 low-inflation environment – the Act gave the Bank a basis for maintaining its resolve and it also provided the public with an assurance that the Bank’s resolve was genuine.

Increasing credibility also speeds up the effectiveness of monetary policy.  Below is a stylised diagram of the ways that monetary policy can impact on the economy and feed through to inflation outcomes.  If at first we ignore inflation expectations, the transmission path between a change in monetary policy settings (eg a change in the Official Cash Rate) is quite long and complicated.  An increase in the OCR needs to influence wholesale and retail interest rate settings, the exchange rate, saving and spending patterns, business competitiveness, business investment decisions, employment outcomes, wage bargaining positions, and so on.  As suggested by the diagram it could take a number of years for an interest rate rise to have its full effect on inflation outcomes.  However, if the Bank has credibility, then an OCR increase should feed through into influencing public inflation expectations and so speed up the desired impact on inflation outcomes: people anticipate the effect of monetary policy, thereby reducing the need for further action by the Bank. 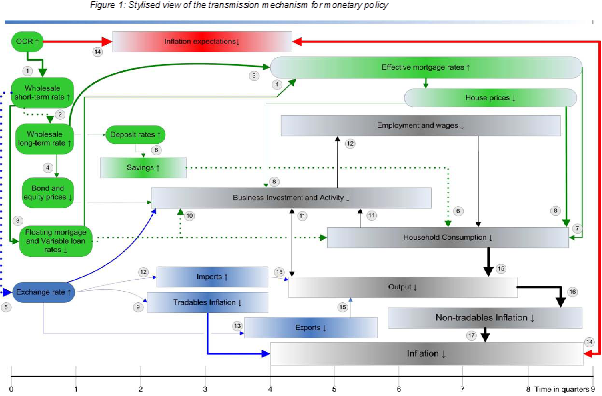 The presence of inertia in the price-setting process means that it is typically a slow process in changing inflation outcomes.  The Bank not only has to repeatedly demonstrate its resolve in maintaining low inflation, it must also obtain low inflation results over a number of years to reduce actual cost pressures and so reduce the typical size of flow-on effects.  The implication is that vigilance needs to be maintained to ensure that the success of inflation control is maintained.  Despite many years of low inflation, a cost-plus mentality still dominates many New Zealand markets.  Success begets success, but it also means that it can all unravel if inflation begins to rise again. 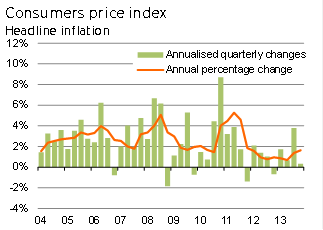 This reasoning brings us to the need for the Bank to make an early strike at growing inflation pressures.  Given weak New Zealand and world demand conditions, inflation outcomes have remained below 2%pa for more than two years.  But there are a number of reasons to be concerned that inflation pressures could quickly mount this year.  To begin with, the low inflation outcomes of recent years have been largely a world inflation outcome, with declines in tradable prices offsetting non-tradable inflation that has persistently been above 2%pa.  With the period of deflation for tradable goods coming to an end, the headline inflation rate could begin climbing very quickly in 2014.  There is the added risk that the rise in inflation outcomes will reawaken dormant inertia forces.  For example, we are already hearing calls from the Labour Party for 4% wage rises in anticipation of a stronger economic performance in 2014.  With inflation expectations also on the rise, it would suggest that a prudent Reserve Bank would seriously consider increasing interest rates sooner rather than later – perhaps less in need of reducing current demand pressures, but rather to strongly signal its continued resolve for maintaining price stability, and pre-empting a build-up of inflation inertia. 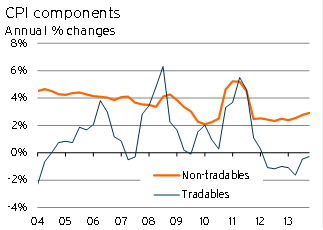 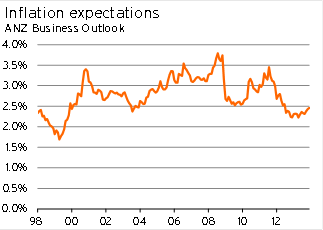