There has been talk of late that the gap between the economic performances of our provinces and major urban environments is widening.  However, even though these types of comments have been well intentioned, generalised conclusions of this nature are unsubstantiated by economic data and unhelpful from a policy perspective.  Apart from some isolated cases of regional struggles, the majority of provincial economies have outperformed major cities over the past decade.  This article briefly dispels some myths using information from Infometrics’ regional economic database.

Infometrics’ regional economic database provides a consistent framework for comparing the economic performances of all 66 territorial authorities in New Zealand1.  GDP data in the model is coded to a fine industry level, meaning that headline growth can then be dissected by industry to see what really is driving economic activity in each district.

The data shows that the top ten fastest growing territorial authorities on a GDP per capita basis over the ten years to March 2013 were all in the provincial heartland.  These top performing districts were Buller, Southland District, Waitomo, Waitaki, Grey, Opotiki, Kaikoura, Hurunui, Timaru, and Ashburton – averaging GDP per capita growth of 3.4%pa over the ten year period. 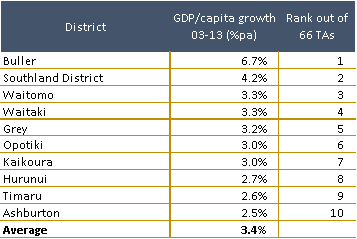 Glancing through the growth contributions of various industries within these top performing districts reveals a common theme – strong economic performance was almost always driven by the primary sector (mainly agriculture, but also forestry and mining), as well as meat and dairy processing.  Construction activity also often played a supportive role to these industries.

This theme is not surprising when one considers what has happened to primary sector returns over the past decade.  According to ANZ’s Commodity Price Index, the world price of New Zealand’s key export commodities in the March 2013 year was double its average from the March 2003 year.  Export commodity prices have soared in response to rapidly expanding demand for primary goods in emerging nations, particularly for many of the protein rich foods which New Zealand has a comparative advantage at producing.

In fact, so many districts in provincial New Zealand performed well over the past decade that it is not until spot 20 on the list of regional GDP per capita growth that we reach one of the five biggest urban districts.  Despite seismic disruptions, Christchurch City’s GDP per capita grew 20th quickest out of New Zealand’s 66 territorial authorities over the ten years to March 20132.  Hamilton City was the next major urban area on the list (taking spot number 44), following by Wellington City (48), Dunedin City (51), and Auckland (52).

In contrast to the top performing districts in provincial New Zealand, growth in New Zealand’s five largest urban districts has been more moderate over the past decade.  The key detractors for urban districts were the service sector, health, education, wholesale/retail trade, construction, and logistics.  Although these industries found some support from helping to facilitate the production and trade of primary goods from provincial New Zealand, their overall performances were held down following the Global Financial Crisis and domestic recession by businesses and households (and more recently the government) tightening their belts.

In addition to their strong economic performance, many districts in provincial New Zealand have also had strong wage earnings growth to boot.  An analysis of Linked Employer Employee Data (LEED) from Statistics NZ shows that the ten top performing districts from Table 1 had growth in average wage earnings of 4.5%pa over the ten years to March 2012.  In comparison, wage earnings in the five biggest urban territorial authorities grew by a slightly slower 4.0%pa over the same period.

Furthermore, not only have many provincial districts outperformed their urban peers in terms of economic activity and wage growth over recent years, but housing affordability is markedly better in the provincial environment.  Infometrics’ calculates that the median house in the top ten performing territorial authorities in Table 1 cost on average 5.3 times the average labour market income in 2012, while the typical house in the urban territorial authorities in Table 2 was substantially more expensive – at 7.0 times the median income.  This means that houses are often more easily within reach for those working in provincial New Zealand.

But there are still some struggles in provincial New Zealand

Although this article has so far shown that most of provincial New Zealand has performed well over the past decade, there is still a small subsection of provincial districts that have struggled.  The remainder of this article identifies why this group has struggled and comments on whether a policy response is warranted.

There were nine territorial authorities in New Zealand where GDP per capita fell over the ten years to March 2013.  These places were South Taranaki, Ruapehu, Central Hawke’s Bay, South Waikato, Stratford, Western Bay of Plenty, Otorohanga, Thames-Coromandel, and Waikato District. 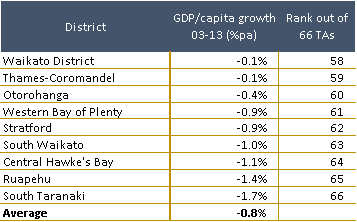 Glancing through the growth contributions of various industries within these districts shows that the key detractors were generally wood/pulp manufacturing, manufacturing of equipment and metals, mining, and gas supply.  The issues driving the decline of all of these industries are structural rather than cyclical.  This means that the industries have been enduring a painful adjustment to a permanent reduction in demand or resource availability, rather than something cyclical which will eventually work its way out.

Drivers of structural change within these industries have been outside of the local authorities’ and central government’s control.  For example, wood/pulp manufacturing has been unable to compete with the significant expansion of low-cost, high-volume, wood product manufacturing capacity in Southeast Asia, while the gas industry in Taranaki has faced declining production as the sun slowly sets on the Maui gas field.

From a policy perspective, little can be done to counteract these structural changes, apart from the subsidisation of the industries – but that is not a policy that should be endorsed.  I have an inherent distrust for industry subsidies, as policies which artificially distort the flow of capital outside of usual market signals tend to lead to less efficient resource allocations and weaken overall economic returns in New Zealand.

The best response for New Zealand as a whole is to let structural changes in this small subset of provincial districts play out.  Structural change is a natural, albeit painful, period of rebalancing away from industries in which districts no longer have a comparative advantage.  During this process, the government’s only role should be providing short-term financial support via its benefits system and helping people into new careers by funding training or assisting in finding work in other industries.  Over the long-run, this approach allows the New Zealand economy the flexibility to realign itself towards industries in which we have a comparative advantage compared to the rest of the world.

Benje Patterson is an economist at Infometrics Ltd

1 Excluding Chatham Islands and area outside of territory authority

2 The earthquakes actually boosted GDP per capita in Christchurch as the resilience and innovation of businesses ensured the decline in GDP immediately following the earthquakes was smaller than the population exodus.  More recently GDP in Christchurch has boomed as work to replace the city’s damaged infrastructure and buildings gathers pace.  If one looks at the period before the first earthquake in September 2010, Christchurch performed in the middle of the group of the five big urban territorial authorities.