Predicting population growth in the regions

Anticipating future population growth is crucial for local councils to adequately plan for the provision of services and to anticipate the future rates base. There are numerous factors which influence the future population of regions including how much new land is opened up for development, its attractiveness for retirees and its economic prospects.

SNZ produce nine different scenarios at the national level and high, medium and low at the regional level. Their middle-of-the-road or ‘medium’ scenario tends to be used by policy makers as the most likely scenario. In 1987 their medium population projection for New Zealand was for the population to reach 3.6 million by 2006.  It turned out to be 4.2 million.  Even the highest 1987 population growth scenario projected a population of 3.9 million in 2006 and did not reach 4.2 million until 2021, fifteen years after the fact.  The government’s 2003 report on Population and Sustainable Development suggested that the population would reach 4.4 million by 2021, a level reached ten years earlier.

Statistics New Zealand latest medium projection is based on the conservative assumption that average life expectancy at birth will increase by only 1.6 years per decade up until 2061. Yet life expectancy increased by 3 years per decade over the past twenty years.  American economists Mullin and Philipson have shown that life insurance companies predict that life expectancy will continue its rate of increase rather than slow down as official forecasts suggest. They believe that life insurance companies are better demographic forecasters than official agencies as their livelihood is directly tied to the accuracy of their longevity forecasts.  If they under-estimate life expectancy they risk charging premiums that are too high and will lose market share to their competitors; over-estimate and they will end up paying more than expected in claims.

Incorporating a view of economic prospects

At the national level there is a strong link between New Zealand’s economic performance and migration. We are currently experiencing near record international net migration mostly because of the strength of the New Zealand labour market relative to the Australian labour market.

The impact of economic performance is even more profound at the regional level. New Zealanders are highly mobile and move to where jobs are located. A region that performs well economically and creates jobs will attract workers and its population will grow. When Statistics New Zealand project the population for a region they do not explicitly consider the economic prospects of the region. It would appear that their projections rely to some extent on trend analysis which misses turning points in population growth.

Southland region offers a good example.  The region’s economy struggled for several decades and its population appeared to be in terminal decline.  Statistics New Zealand predicted that its population would not only continue declining but its decline would accelerate between each census up until 2021. In 2008 Infometrics prepared population projections for Southland region which took into account the region’s economic prospects. We recognised that the region’s economy had turned a corner in light of good dairy prospects and that the region had potential to grow again.  Our baseline scenario of economic and population growth predicted modest population growth of 0.4% per annum between 2006 and the next census in 2011 compared with SNZ’s estimate of a decline of 0.2% per annum. As it turned out the census was delayed by two years but the results of the 2013 census showed that Southland’s population had grown by 0.4% per annum over the seven year intercensal period.  This shows that incorporating a view of economic prospects is critical for population projections.

Figure 1. Comparison of projections of Southland region’s population prepared in 2008* 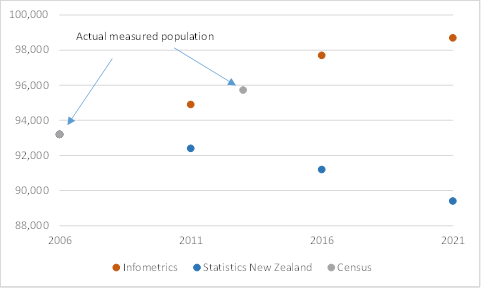 Population projections are a vital input to future plans for regions.  They inform future expenditure on schools, health facilities and other infrastructure. But is SNZ well placed to make an explicit judgement call on all the social influences that impact decisions on Kiwis to relocate? Perhaps they should focus on further improving their measures of current and historical population developments, such as interregional migration, and leave projections to unofficial agencies who are willing to make judgement calls about social developments and their implications.

* Population projections prepared by SNZ and Infometrics use a slightly different definition of population to the usually resident population definition used in Census. In this article we have adjusted the population numbers used in the projections to be consistent with the census definition.