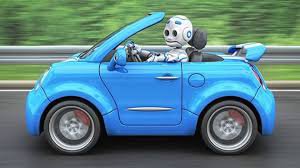 Are drivers at risk of losing their jobs?

In December 2016, the White House released a report investigating the potential risks and consequences of artificial intelligence and automation technology1.  A short case study within this report describes the number of US jobs at risk from self-driving technology.

The report identifies heavy and tractor trailer truck drivers and self-employed drivers as the most at risk of experiencing substantial changes or of losing their jobs to automated driving technology with job replacement weights of 80% and above (see table below).

Existing part- and full-time U.S. jobs may be threatened or substantially altered by AV technology

What is the potential impact on New Zealand’s transport sector?

In the March 2015 year, the number of people employed in similar occupations in New Zealand were as follows:

Full and part-time drivers in the New Zealand economy, March 2015 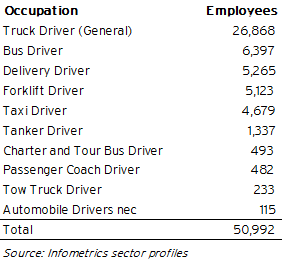 Given 2015 employment levels and drawing on the White House’s replacement rate estimates, an estimated 17,000-44,000 driver jobs are threatened by the emergence of automated driving technology.

Potential range of current jobs at risk in the transport sector

However, there is one factor that is not included in the White House report… time.  Given a business as usual outlook, Infometrics forecasts that the number of employed drivers in the economy will climb 4.3% to a total of around 53,200 people by 2021.

But will jobs already be replaced by self-driving technology by 2021? Developments in this space suggest we are already on the road to seeing self-driving vehicles… on the road.

The transition from adaptive cruise control to driverless vehicles

Many vehicles already use a degree of self-driving technology, such as adaptive cruise control.  Adaptive, or autonomous, cruise control uses GPS positioning to navigate the camber of a corner, or change light settings for fog.  The progression of the machine taking the wheel is already happening, but when experts say self-driving cars are just around the corner, these cars will still require driver in the driver’s seat for some time.

When will it happen?

Research by IHS Markit suggests that driver-controlled self-driving vehicles will be on our roads by 20212 , but fully driverless cars will only gather momentum in the decade from 2025.

Using data from this IHS Markit report , we estimate that there could be 23,000 driver controlled self-driving cars on New Zealand roads in 2035 and 15,000 driverless self-driving cars.  Due to the relatively higher cost of labour, we think that this technology will be more quickly adopted by businesses, first taxis and then, with legislation in place, heavy commercial vehicle transport.  Delivery drivers and couriers are less immediately at risk of vehicle automation as not all of their role is driving – some of it being the door-to-door delivery service.

However, in 2021, the effect of autonomous vehicle technology on our business as usual employment scenario is expected to be relatively minimal, with only about 50-100 jobs at risk of replacement at this time3 .  Getting a grip on when self-driving technology is due to hit provides more in depth analysis on when autonomous vehicles are due to make headway into the New Zealand vehicle market.

2 One could argue that most trains and even planes (but not on most days at Wellington airport) already meet this classification.

3 Given forecasts for the size of the self-driving vehicle fleet 2025.