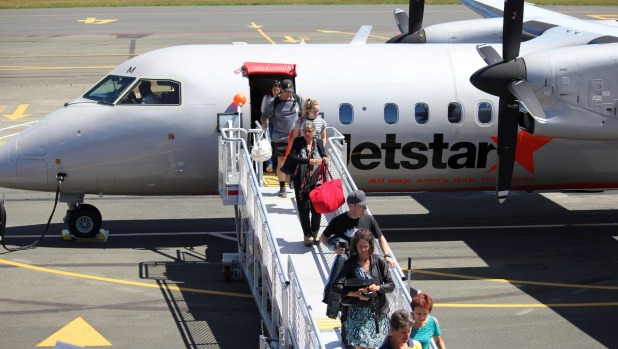 Which region will Jetstar fly to next?

Consumer price data from Statistics New Zealand shows that the price of domestic air travel fell by an average of 5.4% across 2016.  In comparison, prices more generally across the New Zealand economy, as measured by the CPI, rose by an average of 0.6% over the same period.

This improvement to the affordability of domestic airfares, alongside better conditions for households and businesses, as well as strong international tourism and population growth saw demand for domestic flights soar.

Using operating statistics released this morning from Jetstar’s parent company, Qantas, as well as statistics from Air New Zealand, we estimate that there was a record 12.5 million domestic passenger movements in 2016.  This annual total was up 9.5% from its 2015 level and more than 25% above its level from five years ago.

What’s more, Jetstar’s regional expansion is not simply a cannibalisation of Air New Zealand’s passenger base as growth has continued to be spread across both major airlines. Instead Jetstar’s competition with Air New Zealand has grown the market by helping to bring flying within the budgets of a wider range of people.

Passenger growth at Hawke’s Bay (Napier), New Plymouth, Palmerston North, and Nelson airports has regularly exceeded 20%pa each month over the past year.

Perhaps the most startling growth has been at Nelson Airport, where passenger numbers are tipped to top 1,000,000 on a rolling 12 month basis by the end of the current (June 2017) financial year, compared to 865,023 passengers in the June 2016 year.  Not to be outdone, passenger numbers at Hawke’s Bay Airport appear on track to push past 650,000 this financial year, compared to 566,431 last year.

New Plymouth Airport welcomed an additional 69,476 passengers in 2016 to take the annual total across the calendar year to 411,661.

Passengers numbers through Palmerston North Airport reached a record 600,000 on a 12 month rolling basis last month, after having hit 500,000 in May 2016.

Given the success of Jetstar’s first foray into the regional market, the rumour mill abounds with speculation that Jetstar is poised to further expand its regional New Zealand network using more surplus turbo-prop aircraft from its parent company, Qantas.

The million-dollar question is, if such an expansion indeed occurs, where in regional New Zealand would these aircraft be put to work?

It is tempting to assume that Jetstar would look to the runt of its previous shortlist of regional suiters from when it announced it was entering the regional market back in 2015.

These centres were Invercargill, Rotorua, and Hamilton.

However, we shouldn’t limit ourselves to just assuming that additional flights would include new destinations. Instead Jetstar would probably firstly focus any additional regional resources on increasing the frequency of existing services and plugging in gaps to places it already flies.

For example, Jetstar may look at adding direct Wellington to Napier services, rather than only flying to Napier from Auckland.

Only after such a consolidation to its existing network had occurred would it be likely that new destinations come onto the table.

Let’s briefly humour ourselves and consider which criteria Jetstar may invoke if the airline is indeed entertaining adding a new destination to its regional network.

Secondly, the airline would also look at the underlying demand drivers in the region in question.

The size of a region’s population, residents’ ability to pay for air travel and their level of connectedness to people around the rest of New Zealand and abroad are key demand drivers.

The likelihood of a region’s business community to use the air service for business travel and air freight is also important.

Another obvious consideration will be the size of the region’s tourism sector.

But even if an area ticks most of these boxes, the airline must still think about the shape of its existing network and where the destination is geographically-located.  Airlines typically shy away from isolated destinations that create long “out and back” runs, preferring a more compact network, which allows for shorter and more frequent flights.  Such a framework also minimises disruptions in the event of any engineering or weather-related issues.

If I was a betting man, I would unfortunately have to say that this last criterion would certainly count my hometown of Invercargill out of the running for any Jetstar expansion.  Furthermore, Invercargill is arguably already in Jetstar’s catchments for both its Queenstown and Dunedin main-trunk jet services.

To me the next cab off the rank for any additional Jetstar’s regional network would also not lie in Hamilton or Rotorua.

Instead I think a compelling case can be made for stitching Christchurch into Jetstar’s regional network.

Not only does Christchurch tick all the boxes for a desirable destination listed above, but Jetstar already flies main-trunk jet services to Christchurch so has support resources in place at the airport.

The recent inclusion of Jetstar in the latest all-of-government air travel contract also adds to the case of Christchurch being brought into Jetstar’s regional network as there is a large government presence in Christchurch.

The obvious choices of regional services from Christchurch would be to Nelson, and, my personal favourite, between Queenstown and Christchurch.

Whether this conjecture proves on the mark remains to be seen.

However, for the sake of regional economies, it is to be hoped that Jetstar continues to flourish in the regional market over the long term and is indeed considering further expansion.

Ongoing competition between Air New Zealand and Jetstar is just what New Zealand’s regions need to enjoy the benefits of regular and affordable regional air connections.

1 The 2015 figures are actual passenger numbers taken from Jetstar’s parent company Qantas’ financial results. The 2016 figure is estimated by Infometrics, using actual figures from Qantas for the first half of 2016 and then assuming that the same annual growth rate continued in the second half of 2016. This estimation was required as Qantas has begun combining Jetstar’s New Zealand domestic passenger data into total figures for Jetstar international.