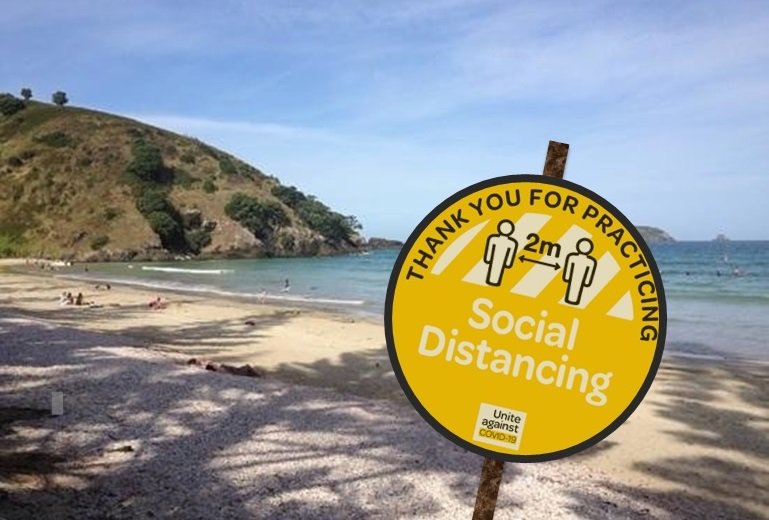 Omicron has broken out into the community, and New Zealand finds itself at red in the COVID-19 Protection Framework, with concerns of up to 25,000 cases a day. The Omicron outbreak continues the incredible levels of uncertainty that have been a hallmark of life over the last two years. Our latest set of forecasts for the economy will be published on 4 February, and they are set to reflect both this uncertainty but also the stronger position the New Zealand economy has worked hard to achieve. From the Beach provides an overview of some of the key factors (apart from COVID-19 itself) that we think will define economic outcomes during 2022.

A year ago, the Reserve Bank’s forecasts were predicting that inflation would remain below 2.0%pa until late 2023. By May, the Bank was starting to see some inflation in the system, with a forecast peak of 2.6%pa. Now we’re staring down the barrel of an inflation rate that could top 6.0%pa. However, at its most recent Monetary Policy Review in November the Bank was still hesitant to significantly reduce the amount of stimulus it is applying to the economy.

Debate continues to rage about how much of this inflation spike is temporary or due to one-offs. Although our Reserve Bank has subscribed to this transitory view of inflation, the Bank has also been at the forefront of interest rate rises globally, as it has faced an economy less directly affected by COVID-19 than most other countries have been. Importantly, though, other central banks have started to become more concerned about surprisingly strong inflation. By late last year, the likes of the US Federal Reserve and the Bank of England started reducing stimulus much sooner than had been expected.

Chart 1 shows that most forecasters expect New Zealand’s inflation to have eased to between 3.0% and 3.5%pa by the end of 2022, slowing further to around 2.5%pa by the end of 2023. But all forecasters grossly underestimated the lift in inflation during 2021 and are working with models calibrated on three decades of price stability. Anecdotes of continuing price rises remain common, and it is unlikely that the full effects of last year’s surge in international shipping costs have flowed through into the prices of imported products yet.

There’s little the Reserve Bank can do about some of the inflationary sources, particularly those originating overseas. But with inflation expectations at their highest level since 2008, the Bank must take a sufficiently hawkish stance to ensure that it keeps a lid on second and third-round effects and prevents inflation from becoming more systemically embedded.

Perhaps the most astounding aspect of monetary policy is that, even with an explicit mandate to target “maximum sustainable employment”, the Reserve Bank has not reacted more emphatically to the rapidly plunging unemployment rate, with the Bank itself noting that New Zealand’s labour market is above maximum sustainable employment. With just 3.4% unemployment in the September 2021 quarter, the labour market is now clearly unsustainably tight. Survey indicators show that it is as difficult as it has ever been to attract and retain staff (see Chart 2), and with the cost of living rising rapidly, workers are in the perfect position to demand bigger pay increases during 2022.

In this regard, debate about shipping costs, oil prices, or disrupted global supply chains are a distraction from the fundamental imbalance between supply and demand that is underpinning domestic inflationary pressures. Some commentators have accused the Reserve Bank of being heartless towards households when lifting interest rates, because the increases will further squeeze their budgets when they are already facing a raft of other price rises.

These commentators have forgotten that the whole idea of raising interest rates is to take some of the heat out of aggregate demand and reduce the imbalance with aggregate supply.

Short of engineering a slowdown in the economy, the only other potential relief valve for the labour market is an increase in the labour supply. Data from the Household Labour Force Survey shows that the working-age population expanded by just 0.7% over the year to September 2021 – the slowest growth rate in nine years, and little more than a quarter of the 2.6%pa increase recorded in June 2020.

Businesses had been hoping that access to workers from overseas this year would improve. However, the government’s plans to reopen the borders to non-residents from the end of April have been uncertain since the timeline of other parts of the staged border reopening in January and February were delayed due to the emergence of Omicron internationally. Nevertheless, the appearance of Omicron within New Zealand suggests there will be little need for the more stringent MIQ restrictions to be sustained beyond the first half of 2022.

Even when a reopening does go ahead, net migration is unlikely to rebound to pre-COVID levels – especially with Immigration NZ’s processing capacity having been significantly reduced during the pandemic. The fact that the organisation is struggling to deal with the 2021 Resident Visa underscores these concerns.

Likely to get tougher for households to keep spending

The strength of the labour market has been one of the key contributors to robust household spending outcomes over the last two years. More people in work means more people getting paid and spending that pay. The latest spending data from Marketview via MBIE shows that activity has again bounced back well after the lockdown and restrictions in the second half of last year. There are fewer signs of the post-lockdown catch-up that characterised spending after 2020’s lockdown, but Chart 3 shows overall spending patterns that are better than might have been suggested by surveys showing weakening consumer confidence.

There are two additional points to note regarding Chart 3.

Like most other forecasters, we have underestimated the resilience of consumer spending over the last two years. So we don’t want to begin 2022 by being unduly downbeat about how spending might turn out over the coming year. Nevertheless, we note that the increased transmissibility of Omicron, could have a more substantial effect on consumer behaviour than the previous COVID-19 outbreaks in New Zealand. Omicron appears to be having a dampening effect on people’s willingness to go out overseas, given the increased chances of catching COVID-19 from other people. The ongoing hassles associated with going out (such as masks, vaccination passes, scanning in, and the possibility that your plans need to change at a moment’s notice) might also convince people that sometimes it’s just easier to stay at home instead.

Increases in the cost of living, most notably much higher fuel costs and rising interest rates, are also likely to squeeze households’ discretionary spending. And any slowdown in the housing market this year could also weaken spending for store types that have been good performers during the pandemic, such as home and recreational retailing.

After 18 months of rampant house price growth, is it realistic to expect a slowdown in the housing market this year? Chart 5 shows that there is unanimity among forecasters that the housing market will cool significantly in 2022, with house price inflation expected to slow from its current rate of 25-30%pa to somewhere between -3.2%pa and +5.6%pa.

Anecdotes and unofficial data suggest the government might have inadvertently succeeded in constraining housing demand with its changes to the Credit Contracts and Consumer Finance Act, to a much greater degree than any of the other changes last year (such as the extension to the bright-line test, tax changes for investors, or tougher loan-to-value ratio requirements) seemed to achieve. Whatever the case, we expect the cumulative effects of all these changes to show through in reduced buyer demand for housing this year. The Reserve Bank’s current consultation on debt-to-income ratio restrictions and floors to test interest rates is likely to lead to further restrictions this year. And with all mortgage rates above 4% by the middle of this year, potential buyers will be additionally constrained in how much they can pay for a property – if they can get a mortgage in the first place.

But more important for the housing market’s health over the medium term is the supply of housing, which has lagged behind demand throughout the last decade and been a key driver of the affordability crisis. Capacity and labour constraints in the construction industry mean that the residential build rate is not as high as the latest annual consent total of 48,522 would suggest. Double-digit construction cost inflation also threatens to quickly turn off the development tap if house price inflation slows as expected during 2022. Developers will become increasingly concerned about their ability to sell completed properties if buyer demand softens, particularly given the risks associated with construction delays and cost overruns.

Counteracting these cost and capacity concerns around the supply of new housing are the regulatory changes the government is making to encourage densification. The Medium Density Residential Standards and National Policy Statement on Urban Development will have a massive effect on the nature of the housing stock in New Zealand’s major cities over the next 5-20 years. The experience with Auckland’s Unitary Plan suggests that it could be 18-24 months before these regulatory changes have a discernible influence on the mix of dwelling consents, so it might be premature to expect much of an effect on consent numbers or the housing market during 2022. Indeed, at the margin, some consent decisions on the edges might wait to lodge their paperwork until after the changes take effect in August. But the prospect of the looming changes could start to affect housing market outcomes this year.

A word of warning, though: it’s also possible that the Residential Standards could initially lead to higher prices for properties where densification is a relatively easy option. We’ve all seen stories over the last few years about derelict villas in Auckland selling for well above their council valuation, with developers taking advantage of the ability to knock the old house down and build a block of new townhouses. Until the undersupply of housing, which is arguably most critical in Auckland and Wellington, has been addressed, and developers do not effectively have guaranteed buyers for any new property that they build, house prices will continue to be problematic and there will be little or no improvement in the affordability crisis.

There’s a range of factors, aside from the obvious Omicron outbreak, that New Zealand will contend with in 2022. Aside from those we have canvassed above, geopolitical tensions are high in some parts of the globe, climate change requirements are becoming more pressing, and social issues remain across Aotearoa. Local government elections are scheduled for October, with a battle over water, housing, transport, and rates all expected. Adjusting to life with COVID-19 in the community and potential changes to the traffic light system will further challenge New Zealand.

Uncertainty remains, with it being difficult to pick a path forward and plan for what’s next. Different parts of the economy are facing different challenges, from how to grow in the face of constraints, to how to keep the doors open. What is certain is that, overall, the New Zealand economy still stands as one of the strongest performers across the developed world. That strong foundation gives us the best chance to battle through these challenges across 2022.