The tax status of on-line purchases of imported goods has been a subject for public debate recently.  It has become the custom that imports with a value less than $400 effectively have a tax-free status.  This status reflects practical considerations rather than legal status.  New Zealand’s GST system is levied using the Destination Principle, meaning that the liability of tax is based on where a good or service is consumed.  On this basis the legal status is quite clear, all imports should be subject to GST as they are consumed in New Zealand.  So the reason that GST has typically not been collected on imports valued less than $400 reflects practical considerations – the cost of policing the tax does not justify the likely revenue due from low priced imports.

The government has started to question the validity of this assumption.  The growth of on-line retailing has meant that an increasing proportion of consumption is being sourced from off-shore on-line outlets.  On-line retailing is likely to continue to grow and become increasingly internationally based.  This trend threatens both local retailers, who face an unfair tax advantage, and the government’s tax base

The government’s apparent approach is to seek ways to improve the enforcement of the tax.  But if the internationalisation of economic activity and services continues, it points to a fundamental flaw in the design of our GST, which means that attempts to maintain it in its current form will become increasingly fraught and costly.  Rather than devoting increasing resources to protecting the current system, a relatively simple and robust solution is available: change the design of the GST from one based on the Destination Principle to one designed on the Origin Principle.

New Zealand introduced a goods and service tax (GST) on 1 October 1986.  This tax can be characterised as a consumption type value added tax.  It taxes virtually all transactions within New Zealand at one uniform rate (initially 10%, but increased to 12.5% on 1 July 1989 and then to 15% from 1 October 2010).

The design of the New Zealand GST adheres to the “destination principle”.  This principle means that imports should be subject to GST, as the goods and services will be consumed) in New Zealand.  Exports on the other hand are zero rated (i.e. exempt) as final consumption will be offshore.

An alternative to using the destination principle to determine the jurisdictional boundaries of a commodity tax system is to use the origin principle, i.e. where the good or service is produced (rather than where it is consumed).

When officials instigated the process of designing a GST in 1984, New Zealand still operated under a fixed exchange rate regime and there was a high degree of wage rigidity given the preponderance of compulsory unionism in many sectors of the economy.  The combination of these factors (fixed exchange rates, wage rigidities and the dominant use of the destination principle internationally) would have encouraged policy makers to favour a GST designed using destination principles ahead of one based on origin principles.

The reason for this is that the combination of the three factors mentioned would have meant that an origin-based GST would have imposed competitive disadvantages onto the New Zealand export sector.  In an environment when the real exchange could not readily adjust (ie fixed exchange rate and wage rigidities) applying a tax onto exports would increase the world price of products produced in New Zealand.  The tax system would unfairly disadvantage New Zealand based exporters until wages eventually adjusted to the changed environment.  However, the presence of wage rigidities would mean that the disruptive impact would have a devastating impact on the export industry during the slow adjustment.

However, easing just one of these rigidities results in virtual equivalence between the destination and the origins approach.  Indeed a flexible exchange rate system was introduced in March 1985 (actually in the middle of the time when the GST system was being designed) and wage rigidities have also eased considerably since the introduction of the 1991 Employment Contracts Act.

Some of the household’s spending is on imports, which are a leakage from the system (income is spent abroad).  Note this leakage occurs after the expenditure tax filter, as imports are taxable under GST, excise duty and tariffs.  While imports represent a leakage from the system, exports represent an income injection, which under the destination principle are not liable for GST.  Income earned by businesses are eventually paid out to households, after the government takes its cut through income taxes (potential foreign leakages, eg profits abroad, are ignored as the focus here is on expenditure taxes). 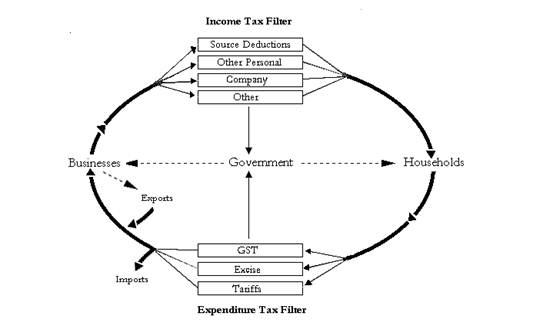 If GST was implemented comprehensively in this way there would be no significant problems with the design of GST.  However, GST does not operate in this pure way in practice.  This is because of the difficulty in applying the destination principle to services, and in particular tourism and on-line imports.  The national accounts rightly treat the expenditure by New Zealanders abroad as an import and the expenditure of foreigners visiting New Zealand as an export.  However, the way that the destination principle is applied by the New Zealand GST means that the expenditure of New Zealanders abroad escapes having to pay GST (though they may have to pay expenditure taxes in the countries that they visit).  In a similar way, because on-line imports represent direct transactions between New Zealand consumers and international retailers, it becomes complicated and expensive to police.  On the export side, tourists who visit New Zealand are liable to pay GST and other expenditure taxes during their stay in New Zealand.  The impacts of this are illustrated in our amended circular flow diagram below (Figure 2).

Figure 2:   Circular flow of income demonstrating GST as it applies in New Zealand 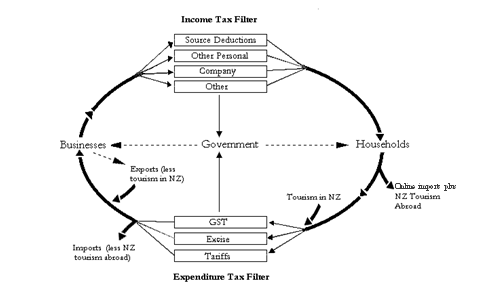 There is in fact a surprisingly simple solution to the GST problem faced by local retailers, and indeed also tourism and other service exporters.  The answer is simply to convert the application of GST from being destination based to origin based.  That is rather than attempt the exceedingly complex task of filling all the leaks from the flawed destination-based system, simply remove the dispensation currently provided to other exporters.  Similarly instead of attempting the impossible task of taxing New Zealanders who travel abroad and policing internet transactions, simply remove all taxes on imports.  The impact of moving GST onto an origins basis is illustrated in Figure 3 below.

Figure 3:   Circular flow of income transferring GST on to the Origin Principle 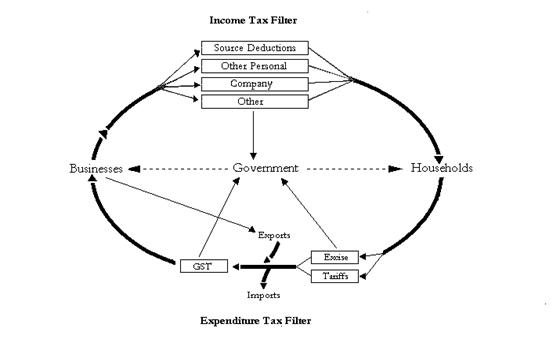 By taxing all exports and exempting all imports, all trade is moved to the same side of the expenditure tax filter, thus removing distortions between different types of economic activity and preserving the aim of not taxing transaction between countries.  Although it might not seem immediately obvious, as long as a country does not attempt to tax both exports and imports, but only one or the other, then the country is not actually taxing the transactions of another country.  A pure origins based system taxes value added (ie production within New Zealand) while a pure destination based system would effectively tax consumption (ie the spending of New Zealanders).  In both cases only New Zealand transactions are being taxed.

An obvious objection that many might have to this approach is to question what the impact of applying GST to our exports will do to the competitiveness of the export sector.  The short answer is probably nothing.  In the presence of a flexible exchange rate, one would expect the introduction of an origins based GST system to trigger a one-off compensating reduction in the nominal exchange rate.  This depreciation would largely offset the loss of zero-rating status for goods exporters.  The impact will actually be positive for many service exporters, eg tourist operators, as their clients are already paying GST, but they will get the benefit of a lower dollar.  The net impact on local retailers is likely to be neutral, the cost of imports goes up because of the depreciation, but GST is no longer levied.  However, those competing with on-line operations benefit as the price of on-line imports will increase by the extent of the depreciation.

The increase in service sector profits has to come from somewhere.  Their source is the impact of the exchange rate depreciation on encouraging overseas residents to spend more on New Zealand services like tourism and on discouraging the import of overseas services.  The fall in the dollar will encourage more visitors to visit New Zealand and to spend more while here.  It will also make it relatively more expensive for New Zealanders to travel abroad.  It will also raise the effective price of international purchases across the internet – although these transactions will still not be taxed, the lower exchange rate will make the cost of direct importing higher.

An added bonus is that unlike the complexities involved in attempting to clean up the destination approach, a move to an origin approach is actually likely to reduce the administration burden faced by IRD and the government.  The taxing of exports would end IRD or Customs’ role in administering and policing the zero rating of exports.  Customs would also not be required to apply GST to imports.