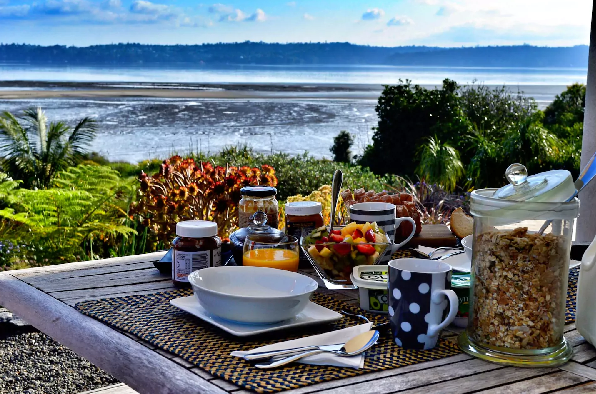 The handbrake has been lifted for tourism operators in regional New Zealand, after years of underperformance following the Global Financial Crisis.  Data from Statistics New Zealand shows that guest nights in 2014 grew in 48 of New Zealand’s 66 territorial authorities (excluding Chatham Islands), adding to evidence from Infometrics’ regional GDP database that 50 territorial authorities had positive growth in tourism GDP over the March 2014 year.

This recent return to growth is in stark contrast to the relatively tough times faced by tourism operators between March 2008 and September 2012, when the annual level of guest nights fell in 46 territorial authorities.

Given this clear turning of the worm for the tourism sector in our regions, one needs to ask what went bad, and why things have recently turned for the better?

The simple answer for what went bad between 2008 and 2012 was the Global Financial Crisis and ensuing economic malaise for most developed economies.  During this period, New Zealanders were less willing to travel domestically amid worsening labour market conditions, while patterns of international tourism to New Zealand also changed.  Auckland and Queenstown benefited from surging numbers of Chinese tour groups and Australian visitors, while tourism operators off the beaten track in most provincial centres faced slower times as their bread and butter, European and US travellers, largely stayed at home.

The answer to why things have recently turned for the better is also relatively straightforward.   Not only did strong economic and labour market growth during 2014 buoy New Zealanders’ confidence to spend on leisure activities such as travel, but there was a sharp rebound in the number of long-staying visitors from Europe and the US.

Visitor arrival numbers to New Zealand from the US, UK, and Germany were up 9.5%, 1.5%, and 13% respectively in 2014.  Data from MBIE also shows that holidaymakers from these nations have plenty of time to explore every nook and cranny of our country as they stay on average for 14, 29, and 47 days respectively.  American and British willingness to travel has risen as economic and labour market conditions in these nations steadily improve, while the relative stability of the German economy has supported increasing levels of German travel to New Zealand.

At the same time as European and American holidaymakers have been returning to New Zealand, travel by Australians and Chinese has continued to flourish.  Even deteriorating economic conditions in Australia don’t seem to have affected things, as many Australians have substituted expensive US or European holidays for destinations closer to home like New Zealand.  In 2014, visitor arrivals from Australia grew by 2.4%, while arrivals from China rose by 16%.

Recent growth in visitor arrivals from China has been characterised by an increased prevalence of independent travel by Chinese visitors.  Increasing numbers of Chinese are choosing to travel independently as they become more accustomed to international travel.  The Chinese government’s banning of whistle-stop shopping tours just over a year ago has also made some forms of group travel less cost effective compared to independent travel.

This trend towards more independent Chinese travel has been great for tourism operators in regional New Zealand as independent travellers stay for longer in New Zealand.  Data from MBIE shows that Chinese visitors to New Zealand over the year to February 2015 stayed for an average of almost 6 days, compared with only 3.5 days in the year to February 2012.  Furthermore, during January/February of this year, the proportion of Chinese visitors staying for 8-14 days exceeded those staying for 1-3 days for the first time (30% versus 27%).

The economic effects of recent growth in domestic and international visitor activity can be put in perspective by considering where tourism GDP in regional New Zealand is at compared with its previous peak from 2008.  The graph below plots Infometrics’ regional tourism GDP estimates for the March 2014 year relative to their March 2008 year level on the vertical axis, and tourism GDP exposures relative to the national average for each territorial authority on the horizontal axis.  For ease of interpretations, the graph has been divided into four quadrants (A, B, C, and D). 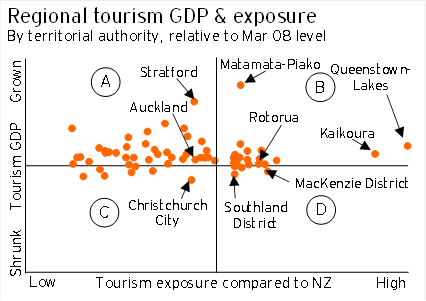 The graph shows that 55 of New Zealand’s 66 territorial authorities have tourism sectors that are larger in real GDP terms than they were before the Global Financial Crisis hit in 2008 (these places are found in quadrants A and B).  Of these top performers, 19 territorial authorities have high exposures to the tourism sector (found in quadrant B).

Many of the jewels in New Zealand’s tourism crown in quadrant B, such as Rotorua, Queenstown, and Kaikoura, are all performing well.  A surprise package has been Matamata-Piako, which has seen tourism GDP more than double since 2008 as visitors flock to Hobbiton!

Quadrant A shows places that performed well, but have tourism sectors that make up a smaller part of their local economy than the national average – there are 36 territorial authorities in this category.  A surprise performer in this category was Stratford, with tourism GDP having risen 90% between 2008 and 2014.  An analysis of spending data from MBIE’s Regional Tourism Estimates (RTE) shows Stratford’s tourism sector has enjoyed strong spending growth from both domestic and international visitors.

There are only 11 territorial authorities who faced falling tourism GDP between 2008 and 2014.  Of these underperformers, only 4 are places that are highly exposed to the tourism sector (quadrant D).  Furthermore, an analysis of guest nights and spending indicators from recent months shows that activity levels have picked up strongly in these areas over recent months, so there is little cause for concern.

An interesting case that stands out among the underperforming areas that have smaller tourism sector exposures (quadrant C) is Christchurch City.  Tourism contributed to 3.3% of Christchurch’s economy in the March 2014 year, compared with 4.4% before the first earthquake hit.  But despite this plunge, delving behind the scenes does show that a recovery is taking place, with tourism GDP in Christchurch having grown almost 10% since its March 2012 post-earthquakes trough.

Following on from last year’s steady improvement in regional tourism conditions, the outlook for the years ahead is also promising.  Not only will New Zealanders’ spending on leisure activities keeping growing, but visitor arrivals from a range of key source countries are expected to climb further.

Key factors that will see New Zealanders’ willingness to travel continue rising are better labour market conditions and higher wealth levels as house prices appreciate.  Low oil prices have also reduced the cost of filling up the car and going on a road trip.

Although the strength of the New Zealand dollar against the Australian dollar will squeeze budgets of some Australian visitors, the New Zealand dollar has weakened against other currencies, such as the US dollar (and to a lesser extent, the UK pound).  Furthermore, low oil prices have also helped bring down the cost of long-haul travel which will further stimulate the number of international visitors coming to New Zealand.  And airlines are also bullish on this outlook, if the number of new international flight connections that have been confirmed or are being talked about is anything to go by.

Benje Patterson is a Senior Economist at Infometrics