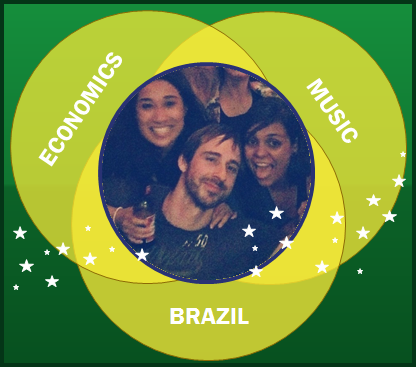 A day in the life of an economist – David Kennedy

The Rio de Janeiro Olympics and Paralympics were a success for New Zealand, with a record number of medals being won by our talented athletes.  At Infometrics, Brazil is always in the back of our minds, as one of our economists, David Kennedy, works remotely from a city in Brazil called Belo Horizonte.  We took the chance to chat with David as part of our regular feature “A day in the life of an Economist” to learn his take on the Brazilian economy and what he enjoys about living in Brazil and its rich culture.

Studied at: Victoria University of Wellington

Benje: The media has widely reported that the heavy financial cost of the Olympics and Paralympics will not be outweighed by any tangible benefit of hosting the Games. Do you agree with this statement?

David: Hosting the Games often brings status and pride to the host nation, but it rarely ever provides a net economic benefit to the host nation.  As the economist Victor Matheson said, “It’s like a wedding.  It won’t make you rich but it may make you happy”.

I’m inclined to say that, given Brazil’s social problems, the Games was a lavish wedding that the country could least afford.  The money would have been better spent fighting poverty and crime and providing better opportunities for healthcare and education in the impoverished classes.

BP: How have the Games been received by the average Brazilian?

DK: The Games were awarded to Rio de Janeiro in 2009.  At this point in time, Brazil seemed to be overcoming all its historic problems.  Its economy was growing.  Economic growth, in conjunction with social programmes, lifted millions of households out of poverty, while simultaneously improving rates of immunization and schooling amongst children.  Universities opened their doors to a wider range of people, including the poor and racial minorities.  The 2016 Olympic Games were finally going to be Brazil’s chance to shine on the world stage.

Unfortunately, since then, Brazil has been hit by a multitude of problems that challenge even the indomitable Brazilian spirit.  Falling export prices for oil triggered an economic recession. The economic recession triggered a fiscal crisis.  The fiscal crisis has been exacerbated by political dysfunction.  Media leaks and police investigations have revealed a prevalence of corruption throughout all layers of the political system.

By the time the 2016 Olympic Games arrived, many Brazilians wanted little to do with them – they associated the Games with the ineptitude and corruption of the universally despised political classes.

BP: What are the economic challenges facing Brazil now?

DK: Brazil’s biggest economic challenge is that government debt, both at national and state level, is growing at rates that are unsustainable.  Gross government debt was only 52% of GDP in early-2014 but is predicted to exceed 70% of GDP this year.

To avert further disaster, the Brazilian government will need to get control of its fiscal spending.  The most reasonable targets for spending cuts are its relatively generous pensions, inefficient subsidies and excessive salaries and perks within the civil service.

However, a separation of powers within the Brazilian political system reduces political accountability, meaning that the required fiscal reforms will probably be delayed for as long as is feasible.  The Brazilian President cannot engage in meaningful fiscal reform without support from the Brazilian Congress.  Congress consists of politicians from 27 different parties, often motivated more by their personal interests and political ambitions than the common good.

BP: Do you think your time in Brazil has changed how you approach economics?

DK: Living in Brazil has given me a greater appreciation of the positive aspects of culture.

In general, economists do not talk a lot about culture.  We prefer to talk about things like resources, trade-offs, opportunity costs, optimization and rationality.

But consider a functional definition of culture: culture is the way humans solve problems of adapting to the environment or living together.  That sounds a lot like economics.

In my view, most Western countries are going through a process of cultural disintegration.  Subsequently, there is less consensus on how to solve the problems of living together.  I believe this lack of consensus lies at the heart of the numerous economic and social conflicts within Europe and the US.  It also makes it hard for NZ to have civil discussions about flags.

BP: What are the opportunities and challenges that arise from working remotely from a “developing” country like Brazil?

DK: I get to enjoy a high standard of living here: food, transport and other services are cheap relative to NZ.  Of course, I also have to deal with language barriers, cultural differences and all the inefficiencies (and dangers) associated with living in a South American country.  For me, that trade-off is worthwhile because I am comfortable with the fickle and fluid nature of Latin living, but other people may feel differently.

BP: What is your background and how has this influenced your work at Infometrics?

DK: When I first attended university as a naïve 17-year-old, I studied Economics and Management because I wanted to use scientific thinking to help people make better decisions.

After graduating, I discovered “the real world” and realized that people with numbers have a disproportionate influence on decision-making.  So I returned to university to study econometrics and applied statistics.  My subsequent roles have included consultant, researcher, economist, statistician and forecaster.  Most of what I do now for Infometrics involves dreaming up systems to manage, manipulate, forecast and present large amounts of data.  I enjoy my work.

BP: What do you enjoy doing when you’re not at work?

DK: I spend a lot of my time experiencing and enjoying the richness of Brazilian culture, learning the Portuguese language and appreciating Brazilian music.

BP: What is an intriguing fact about you?

As a university undergraduate, I despised people who succeeded at economics by being good at abstract mathematics.  In my view these “geeks” were “cheating” because they got good grades but their abstract mathematics provided little useful insight or intuition into real-life problems.

These days, most of what I do is abstract mathematics.

BP: Thanks David for taking the time to talk to me about Brazil and your life there. I hope you have a spare couch if I (or any of our readers…) ever decide to stop by!