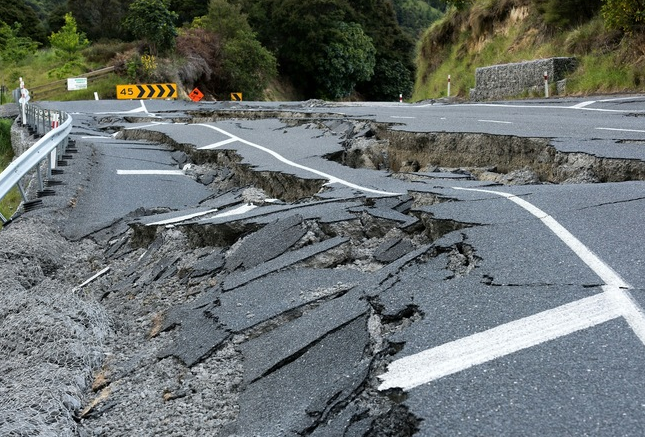 Repairing Kaikoura: the size, the speed, and the cost of delays

Early estimates of the damage from the November 14 earthquake near Kaikoura put the possible cost of repair and rebuilding work at about $2bn.  This additional work comes at a time when the construction industry at a nationwide level, is already finding its capacity stretched.  These capacity pressures are most acute in Auckland, where construction activity is ramping up across all three building types – residential, non-residential, and infrastructure. Demand in Auckland is also having flow-on effects and resulting in capacity pressures being felt in other parts of the country.

Our early assessment suggests that the bulk of the repair work stemming from the Kaikoura quake will be infrastructure-related.  State Highway 1 and the main trunk rail line have been particularly hard hit by the quake and resulting landslides.  With almost $100m in tourist spending per year in Kaikoura, which hinges on State Highway 1 being operational, we believe the government will place a very high priority on restoring State Highway 1 [1], enabling Kaikoura to get back on the tourism network ahead of the 2017/18 summer.  A permanent loss of through traffic for Kaikoura would severely undermine the sustainability of the town and its tourism sector.

South Island freight costs will be pushed up by the diversion of Picton-Christchurch traffic via Murchison and Lewis Pass, which adds 30-40% to travel times and distances.  Travel times via a suggested Wellington-Lyttelton ferry service would take longer still, but might be a more cost-efficient and preferable option for trucking companies in terms of reducing demands on their drivers.  Either way, there will be pressure on the government to repair and reopen the most direct and efficient route via State Highway 1 in as timely a manner as possible.

Although Kaikoura is highly likely to be readily accessible by road from the south in a year’s time, it is not immediately obvious whether through traffic will have been restored given the reported severity of the road damage on State Highway 1 north of the town.  To estimate possible timelines, the 2011 Manawatu Gorge slip is a useful frame of reference.  This slip saw State Highway 3 closed for about a year, with work to clear the slip and stabilise the hillside taking a total of 15 months, during which time traffic was rerouted via the Saddle Road and Pahiatua Track.  Although the lack of good alternative routes in the South Island will add pressure for work along State Highway 1 to be completed more quickly, workers are faced with multiple slips around Kaikoura, and many appear to be larger than the Manawatu one.

The Canterbury experience tells us rebuilding is not a quick process

Graph 1 shows estimated timelines for rebuilding work in and around Kaikoura.  Given the experience following the Canterbury earthquakes, we have adopted reasonably conservative estimates for the timeline of work.  Even under our most optimistic scenario, it is still likely to be more than two years before half of the required work is completed. 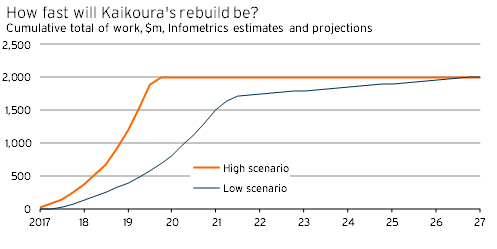 With regards to capacity in the construction industry, we see two positives related to this latest round of quake rebuilding work.  Firstly, construction sector capacity is less stretched in the South Island, particularly in terms of infrastructure activity.  By way of contrast, if a similar volume of residential building work was added onto existing requirements in the upper North Island, the industry would simply not be able to cope given the sustained demand pressures that are already in place.

Secondly, many firms have been reducing their presence in Christchurch given rebuilding work has peaked in Canterbury.  Some of these spare resources will be able to be diverted to Kaikoura over coming months, responding to the new wave of quake-related work that had not previously been expected.  Although the demand for workers around Kaikoura potentially reduces the supply of construction labour heading northwards to Auckland, we believe that not all of Canterbury’s surplus workers would have been willing to relocate to Auckland.  The option of remaining in Canterbury and working in Kaikoura is likely to retain workers who might otherwise have chosen to stay in Christchurch but exit the construction industry.

At risk of an exodus

Assessing what will happen to Kaikoura’s population is perhaps one of the most difficult questions of all.  Between June 2010 and June 2012, the population in the Greater Christchurch area (including the Waimakariri and Selwyn districts) shrank by 3.2%.  However, it is also worth noting that economic activity across this area only fell by 1.2%, from peak to trough, in the year to March 2012.
With tourism making up 12% of Kaikoura’s economy, it seems safe to assume that the negative effect of the earthquake on the district’s GDP will be greater than Christchurch suffered, particularly given that tourism represents just 3.3% of the Greater Christchurch economy.  The government has announced a business assistance package for quake-affected firms in Kaikoura, but the initial eight-week lifespan of the assistance will not be long enough to tide firms over until tourism demand picks up again.

Given concerns over the transport linkages, a “best-case” scenario could mean that many firms would need financial assistance for almost a year, until the 2017/18 summer season gets underway, if jobs in the town are to be maintained.  A whopping 27% of employment in the Kaikoura district relies on tourism, so a downturn in tourism is likely to have negative flow-on effects for other industries in the area as well.

Consequently, a larger population decline in Kaikoura than in Christchurch is likely – but how much larger?  Without sufficient employment opportunities in Kaikoura outside tourism, people may be forced to leave the town and look for work elsewhere.  As a result, we would not be surprised to see a drop of as much as 16% in Kaikoura’s population over the next 18 months (see Graph 2). 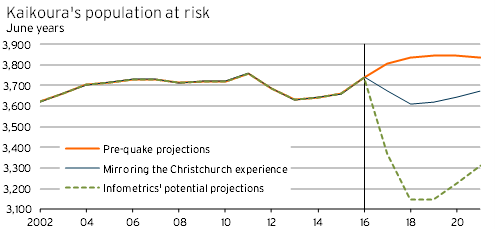 [1]It is not immediately clear whether these transport connections will be restored along their pre-existing routes, although we note that the steep and mountainous terrain along the Kaikoura coast may provide little alternative.   The biggest challenge is not likely to be clearing the slips themselves, but rather trying to stabilise the hillsides so that further debris does not come down in the inevitable aftershocks over the next couple of years.