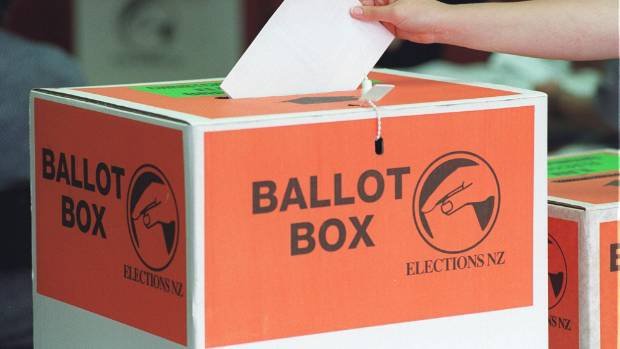 The economy’s strong Bill of health key to a fourth term government?

New Zealand’s economy has seen strong headline growth over the past two and a half years, putting National in a strong position to win a rare fourth term. This strength backs up polls that show most New Zealanders feel the economy will improve further over the next year.

This election, we’ve brought back the Infometrics Misery Index1 , which looks at the state of the economy compared to previous New Zealand governments, to provide a sense test of how the electorate might be feeling in the lead-up to September 23. Although the state of the economy is only part of what may influence voters’ decision, in the past those governments who have overseen poor economic performance have been less likely to be re-elected. On the flipside, governments that have overseen positive economic performance have been treated more kindly by voters, who appear to be more content with the state of affairs.

The fact that the Key-English administration of 2014-2017 is the fifth-highest ranked NZ government since 1972 in our Index bodes well for a National election win in September. The strong economy is demonstrated by the unemployment rate falling to 4.8%, a relatively small current account balance, moderate GDP growth, low real interest rates, and low inflation. In other words, voters generally feel more upbeat than in the lead-up to other elections. 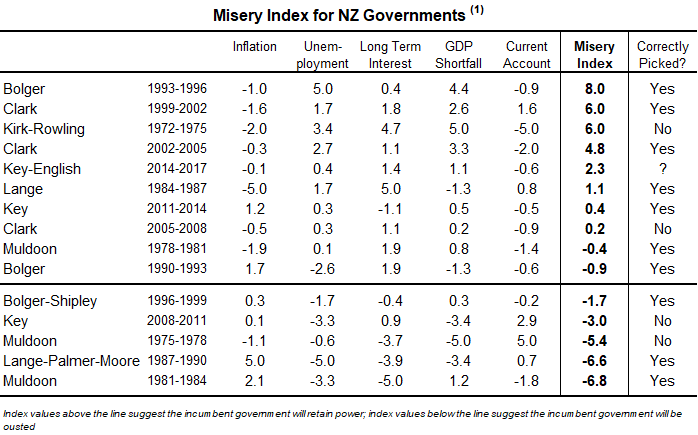 The Misery Index defines misery in the economy if inflation rises, unemployment goes up, long-term real interest rates increase, GDP growth rate is below the long-term average (2.7%pa), or the current account worsens as a percentage of GDP. Lower scores indicate misery, whereas higher scores indicate contentment. The Key-English score of 2.3 puts them ahead of both Key in 2014 and Clark in 2008, but behind where Clark was sitting in 2002. The overall winner of the Misery Index was the Bolger government of 1993-1996, which correctly picked Bolger to be re-elected in 1996.

The rock vs the rock star?

Even though the current National-led government may face a better chance at re-election if there is less misery for voters from a strong economy, the government doesn’t directly control the outcomes of these indicators. However, this doesn’t stop National using these outcomes when campaigning that it is “Delivering for New Zealanders.” The proof in National’s economic credentials will be seen over the next few years. If re-elected, voters will expect to see sustained growth and rising wages, and government action to address issues such as housing and the environment, that have become increasingly concerning.

And re-election might well rely on National’s ability to do a deal with NZ First – a tightrope walk for any seasoned politician. Significant concessions would need to be made to form a National-NZ First coalition, but this options is certainly a viable one.  The few election results that have been incorrectly picked by the Misery Index can be attributed to a charismatic leader, events outside of the government’s control, or a combination of the two. Recent ructions among the Opposition have seen two leaders quit and a resurgence in Labour’s fortunes courtesy of Jacinda Ardern. With the new Labour leader surging in the preferred PM polls to be just behind incumbent Bill English, there is a renewed possibility of a Labour win. As Labour’s policies haven’t changed significantly, this supports the view held by many political commentators that politics in New Zealand is driven by personality rather than policies.

Even if voters are content with the current strength of the economy, there is angst brewing about certain aspects of growth that may prove to be more than just a pinch point. The next government, regardless of which parties make it up, will need to spell out and quickly put into practice policies that address a range of issues including:

Also critical to both individuals and businesses into the future is the state of New Zealand’s infrastructure.  Future governments need to properly plan projects to both cope with population pressures and enable businesses to make good strategic decisions about impending opportunities and challenges.

The Misery Index is a relative performance indicator, and looks at whether several economic variables have improved during the tenure of a particular government compared to the previous administration.  The variables considered are:

The performance of each government with regards to each variable is rated between 5 and –5 (best to worst), with the sum of all five ratings giving the final Misery Index value.

The table above shows that the current National Government has seen solid economic results over the last two and a half years under Prime Minister John Key and his successor Bill English:

1 Adapted from a similar index constructed by Harvard professor Robert Barro for the US.