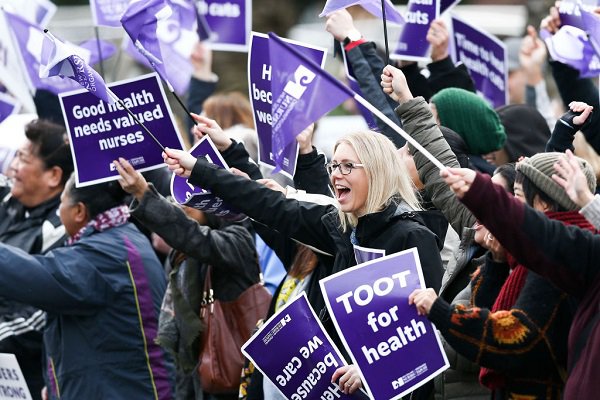 Striking while the iron’s hot

Twenty-seven years after the Employment Contracts Act made union membership voluntary, the current coalition government has named Jim Bolger – the Prime Minister in 1991 – to head its Fair Pay Agreements working group. Fair Pay Agreements are meant to become the centrepiece of employment law policy, yet no one is quite sure yet what they are, or how they will alter employment relations. Among these changes, strike action by nurses, and union meetings, we thought we’d provide a primer on various aspects of the industrial relations scene.

“Fair Pay Agreements” is just a catchy title so far

So far, all we know about Fair Pay Agreements is that they will look to establish the minimum pay level and employment conditions for each industry or occupation, to prevent a “race to the bottom” for low-waged work.

The Treasury revealed last week that the working group would effectively be deciding “foundational policy design questions” and that “Fair Pay Agreements could make substantial structural changes to the labour market”.

Without additional information, employers are drawing linkages between the agreements and the Labour Party’s history with the unions, with some fearing it could bring about widespread strikes.

Although details of the Fair Pay Agreements seem some time off, the fear of strikes has become even more pointed in recent weeks, as NZ enters a period that will likely have the most industrial action in decades. The recent nationwide nurses strike saw 30,000 nurses stop work for a day. Such wide-scale industrial action is unprecedented in the last 20 years – the last time that as many workers went on strike in a year was in 1996 (see Graph 1).

The nurses’ strike, and whatever deal is eventually agreed on, is likely to set a precedent for a number of public-sector negotiations currently underway or soon to commence. Nurses are continuing to negotiate with DHBs for additional nursing staff to cover hospital wards. MBIE and IRD are also negotiating, primary teachers are striking on August 15 for the first time since 1994, and informal discussions have begun for New Zealand Police bargaining.

The expectations of extra pay and potential strike action haven’t just sprung up overnight. The coalition government made it clear during last year’s election that certain workers – especially those in the health and education sectors – would be paid more under a change in government. Workers in these areas are simply trying to extract the money that was promised to them.

In promising higher pay, the government compromised its bargaining position and might need to shell out substantially more than it had hoped, to keep nurses, teachers, and police officers at work – an outcome that is now being realised. However, pay is not just the only thing being negotiated, with many sectors viewing an increase in the number of workers and the quality of work as more important than a simple pay rise.

Nurses and the DHBs are now locked in a staring contest, and it’s yet to be seen who blinks first. The government has doubled its offer from what was put forward originally, but nurses don’t feel they have received all they were promised.

Of interest is the uncomfortable position the government finds itself in now. The government is keen to be fiscally prudent and keep spending under control. But Labour also has a number of private sector unions as affiliated members, with an obvious interest in seeing union activity reap rewards. Although these affiliations do not directly affect the government’s ability to negotiate, the situation is somewhat compromising and the influence of unions on Labour shouldn’t be discredited.

Union membership on the decline, but pockets of strength remain

The power of unions has fallen significantly in New Zealand over the last three decades. Since 1990, the number of registered unions has dropped from 265 to 131. Union membership itself has reduced significantly, driven by employment law changes in the 1990s, from over 500,000 people in 1991 to just under 356,000 in 2017.

Most people are aware of the fall in union membership, but against the backdrop of the total number of workers employed, it’s an even bigger slump. Over the past 10 years, union member coverage fell nationally from 22% to 18%. This fall equates to a drop of 28,000 union members over the same period that the employed population rose by over 260,000 workers.

However, the decline in union membership is even sharper in some sectors. Union coverage in the education sector fell nine percentage points over the last 10 years to 49%, while union coverage for the government administration and defence sector declined by 12 percentage points to 42%. The proportion of a sector’s workforce that are union members begins to define the relative power of unions within each sector, with lower proportions of union workers in a sector reducing the effective power of organised bargaining. Graph 3 details the relative “union power” of unions in each industry of the economy, showing union membership as a proportion of the employed workforce in each industry.

However, it’s also important to note that there are some pockets of high union penetration in critical areas. Unions with higher coverage include the New Zealand Nurses Organisation (NZNO), the New Zealand Educational Institute (NZEI, the primary teachers’ union), and the Post-Primary Teachers Association (PPTA) – all being power public-sector unions.

Employment negotiations will continue to adjust over time as the working environment changes. More time is now spent on negotiating better staffing coverage and filling employment shortfalls, and comparatively less time bargaining for pay rises or meal breaks. These non-financial conditions continue to redefine the employment contracts playing field, and it’s unknown how this shift in worker priorities will affect bargaining in the future.

With uncertainty abound, how do we bridge the divide?

With union coverage continuing to fall, but a rewrite of the laws governing contract bargaining looming, it’s anyone’s guess as to where industrial relations are headed next. So, unions are uncertain of their power and member bases, employees don’t have a clear idea of what changes might occur to their contracts, and businesses lack understanding over how legislation changes will change their future bargaining positions. The government should push forward swiftly, bringing all parties to change along with them, and focusing on deciding and communicating these decisions to businesses, unions, and employees as quickly as possible.