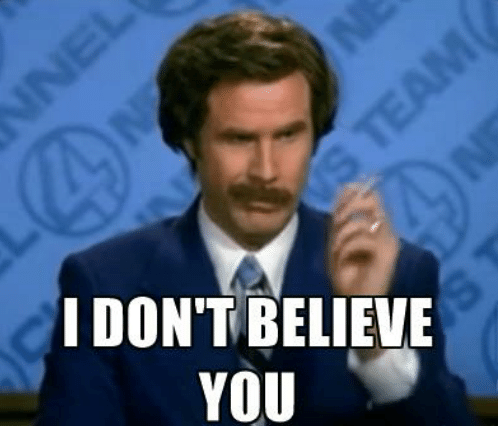 Rates holding steady or going down now the RBNZ position

The August Monetary Policy Statement was the most influential yet under new Governor Adrian Orr, even though there was no change to the official cash rate (OCR). Mr Orr pushed out expectations for a rates hike until 2020, sending the New Zealand dollar sharply lower.

But it was the Governor’s assertion that rates could and would move lower, if weak indicators persist, that is both his biggest warning and most questionable stance.

Under the ”softer growth continues” scenario, “as it becomes clear that growth is not picking up as expected, the OCR would need to be reduced by around 100 basis points. Weaker GDP growth sees employment fall relative to its maximum sustainable level and the unemployment rate tick up slightly. Weaker capacity pressure reduces CPI inflation by around 0.2 percentage points in 2020, relative to the central projection. By the end of the projection, the monetary policy response starts to boost growth raising employment back to around its maximum sustainable level, and inflation to around 2 percent.”

These assumptions of full pass-through underpinning a cut to the OCR are shaky given recent history, and we think the Reserve Bank would be wiser to stockpile its ammunition for a global shock instead.

Infometrics currently forecasts that economic growth will soften, but we don’t believe the Reserve Bank would react with such immediate action on interest rates given the lack of pass-through.

The Reserve Bank has implied that they expect retail banks will pass through the entire rates cut to investors (and savers). However, recent evidence on the pass-through shows exactly the opposite. Of the nine OCR changes over the past four years, six have seen an average 95% pass-through of the cut in changes to the floating mortgage rate. The remaining three have seen much lower pass-through rates, with the most recent change in November 2016 (a 25bp cut) actually coinciding with a 2bp rise in the floating rate. 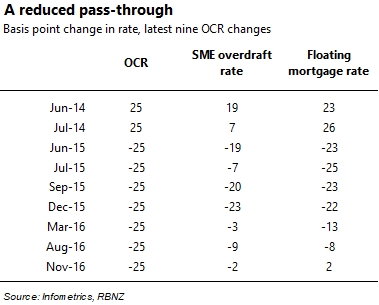 The Reserve Bank’s implicit assertion in their scenario of a 100bp cut to the OCR, of a full pass-through into retail rates, is hard to swallow given the last few changes to the OCR. Adding further weight to the apparent influence of “non-OCR” factors on retail rates is the fact that the gap between the OCR and retail rates has widened in the last year (see Graph 2).

Pass-through of cuts diminish as OCR closes in on zero

So why the change in pass-through in the last three cuts enacted by the Bank? One possible reason might be that as we get closer to the point where the OCR reaches 0% or turns negative, it becomes less powerful as a tool to reduce bank costs. For example, since 2010 the Reserve Bank has set a minimum core funding ratio (CFR), which currently stands at 75%. This CFR requires banks to hold a certain level of funds as a proportion of their lending, making their ability to lend dependent on their ability to access deposits.

Add to this the requirement for banks to hold a proportion of their funding domestically, and banks are effectively forced to pay deposit rates that attract domestic funds, meaning lending rates cannot go too far lower.

Given the evidence from the most recent OCR moves, the viability of 100% pass through of a 100bp cut is doubtful.

Keeping your powder dry for the next (trade) war

That scope is less far below the room we had to manoeuvre in the last external shock – the OCR is now 650bp below the pre- Global Financial Crisis high in 2008.

Holding rates at current levels would also tie monetary and fiscal policy together better to allow for coordination. At the moment, the government is holding to its debt-to-GDP target of 20% and keeping a lid on additional spending even though borrowing costs are low. The government is holding back partly to “save for a rainy day” by retaining fiscal headroom to increase government spending through debt in case of an external shock. Given this restraint, it makes sense for the Reserve Bank to do that same and retain its ability to cut the OCR if an external shock appears and harms growth prospects. Cutting rates now risks losing half the firepower before the war starts.

A potential for a lack of pass-through in any interest rate cuts, coupled with a want for monetary and fiscal coordination, sets out a clear reason for the Reserve Bank to hold the OCR over the next year. We’d expect interest rates remain at low levels but might not dip much further.