The softening New Zealand property market in recent months has essentially been a function of Auckland, its halo regions, and Canterbury in a post-rebuild environment, while property markets in other parts of the country have experienced a surprising amount of expansion.  However, data on sales, prices, and the time it takes for houses to sell suggests that the growth in regional property markets is running out of juice. 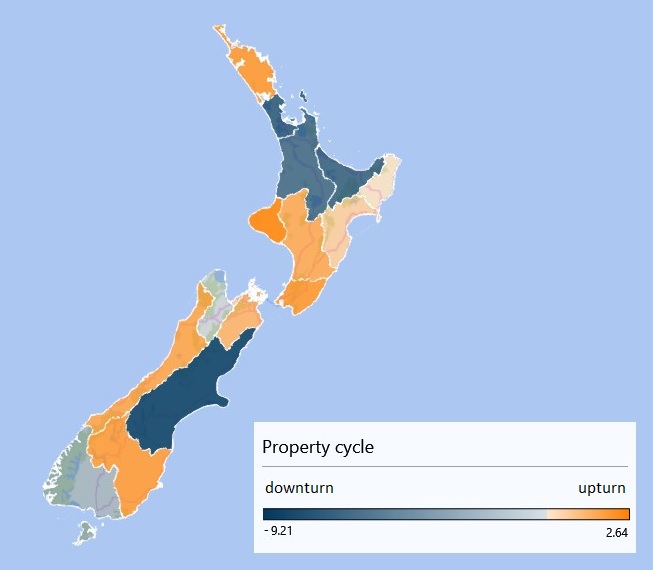 But for most of these regions, property markets have rapidly lost momentum in the past few months.  The graphs below indicate whether a property market is accelerating (a positive number) or slowing (a negative number).  The extent of the upturn has diminished dramatically in the Hawke’s Bay, Wellington, and Southland property markets since the middle of last year.

Dragging down these indicators is a broad slowdown in sales since mid-2016.  Tighter loan-to-value lending restrictions have negatively affected demand for housing across the board.  But there are more factors at play.

Demand should be higher, but isn’t

There is still an increasing number of people moving to New Zealand , and very few people are leaving.  These people need a place to live.  Although it might be preferable to live in Auckland for work, being able to buy a house in Auckland on an average person’s income is at its most difficult since at least 1992 (and probably ever, given our knowledge of nationwide trends since 1950) for any region in the country.  As a result, there has been a spread of people outwards from Auckland to other parts of the country.

A broadening of economic growth across industries has also supported the shift outwards from Auckland.  Employment growth is no longer only being driven by the construction and tourism services sectors.  Infometrics estimates that absolute growth in employment will be strongest among the professional, scientific, and technical professions over the next two years [1] .  Other key areas of employment growth are health and social assistance services, and electricity and gas supply.  In short, more people are expected to have job security across a range of different industries.

With more people in New Zealand and more people in work, one would normally expect increases in house purchases.  But it is also becoming more difficult to buy a house, due to worsening affordability measures, in almost all regions, not just in Auckland.

Against a backdrop of rising interest rates and a drop in available housing stock due to the Kaikōura earthquakes, affordable living issues are especially coming to the fore in Wellington.  These factors have also prompted landlords to raise rents in the region.  In the December 2016 quarter, rental inflation in Wellington hit a seven-year high of 6.7%pa.

Rhetoric from local governments suggests that a lack of supply is becoming more than just an Auckland issue.  Wellington City Council estimates that there was a shortfall of 3590 houses in Wellington City during 2016.  Despite continued growth in consents, the stock of residential buildings in Wellington was knocked back following the Kaikōura earthquake.  Even putting aside the effects of the quake, building activity has not kept up with population growth in the region .

Last week, Wellington’s mayor, Justin Lester, announced that he was considering potential rule changes that would penalise those that hold undeveloped land in key residential zones.  This move suggests growing concerns among local government about housing availability, and any actions taken by councils have the potential to lead to more residential construction activity over the medium term.