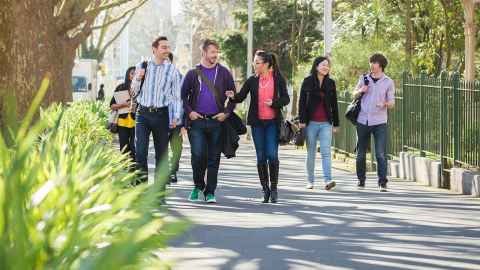 International education is a key part of burgeoning service exports

Just how quick is the export education sector growing?

Alongside a significant global digital marketing campaign, a key factor pushing up international student numbers last year was a policy change in December 2013 regarding work regulations for those in New Zealand on student visas.  Formerly, international students had only been allowed to work for a maximum of 20 hours per week, but now students are allowed to work as much as they like during scheduled holidays, while Masters and PhD students will no longer have work limits at all.

The relaxation of these restrictions has brought studying in New Zealand within the budgets of a wider range of international students.  There are many students from emerging nations that need to find supplementary employment while they study to reduce the financial burden they are placing on families back home.  A quick look at the composition of recent growth shows that it was students from emerging nations that fuelled the international education market last year, with enrolments from India and China rising 67% and 12% respectively in 2014.  Together these two nations accounted for 87% of the total increase in international student numbers in New Zealand.

With more than 110,000 international students studying in New Zealand, it will come as no surprise that the export education sector is also a pretty big money earner for the New Zealand economy.  Infometrics Chief Economist Dr Adolf Stroombergen estimated for ENZ that these students spent $2.75bn in the New Zealand economy during 2014, up 10% since 2012.  The export education sector also generated another $104m in additional services revenue, from things such as the provision of courses to students offshore.

To put things in perspective, the $2.85bn of total revenue [1] generated by the sector ranks international education as New Zealand’s fifth biggest export earner, behind dairy, travel and transport (i.e. tourism), meat, and forestry.  Equally as interesting is that International education exports were more than twice the $1.35bn earned by the wine industry in 2014!

Furthermore, the strong performances of tourism, export education, and other types of service exports have been key factors preventing New Zealand’s external trade deficit from getting too out of hand over recent quarters.  Balance of Payments data shows that the value of New Zealand’s service exports rose 9.3% over the 12 months to March 2015, which helped offset a 2.5% fall in goods exports as a result of plunging dairy returns.

Fizzing about the outlook

Although many factors affect the decision to study abroad, including visa conditions, safety, education quality, and lifestyle considerations, the costs of study are always a pivotal element in the decision making process. On this basis, the falling New Zealand dollar has made us pretty optimistic about the outlook for the export education sector.

These favourable currency movements, along with Infometrics’ expectation that the New Zealand dollar will ultimately settle at a lower level over the coming years, will continue to raise the appeal of New Zealand as a study abroad destination.  Furthermore, the cost effectiveness of New Zealand relative to other popular English speaking study destinations is rising, with value of the New Zealand dollar having fallen relative to not only the US dollar, but also the Australian, UK, and Canadian currencies as well.

When one stands the weakening New Zealand dollar, alongside better direct air connections to Asia and the government’s recent relaxation of working restrictions for international students, the stars seem aligned for strong growth in international education’s contribution to export earnings over the coming years.

[1] This estimate is slightly greater than the $2.43bn figure calculated by Statistics NZ for education’s contribution to service exports in the Balance of Payments during 2015.  We prefer to quote the ENZ figure when considering the value of international education exports as the Statistics NZ figure does not include expenditure from students who stay in New Zealand longer than 12 months.