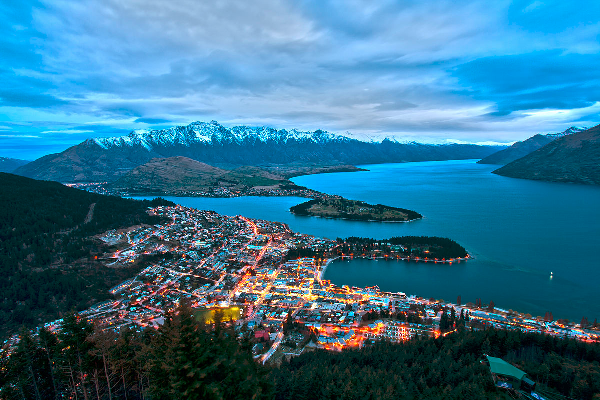 Queenstown-Lakes District was New Zealand’s top performing territorial authority during 2016, with employment expanding by a stonking 10.3% over the March 2016 year.

This growth was almost four times the 2.7% rate of employment expansion seen nationally, and well above the 5.9% employment growth recorded by second-placed Western Bay of Plenty District.

This article reveals more about Queenstown’s stellar year, along with a sneak peek at Infometrics’ 2016 Regional Economic Profile (official release: February 28) to see which other places also had rapid employment growth.

We can’t say that it was a surprise to find that Queenstown-Lakes came out on top after crunching through regional employment data this past month.

After all, Queenstown-Lakes has led the pack over the past year for almost every quarterly indicator of spending and investment that we follow. Population growth in the area soared to 7.1% in the June 2016 year.

The district is in the midst of a tourism surge and building boom that dwarves those experienced in previous business cycles.

Predictably the data shows that it was these two sectors, and industries related to them, that accounted for most of the job creation over the past year.

Of the 2,267 additional jobs in Queenstown-Lakes in the March 2016 year, the number of construction jobs rose 416, while employment in accommodation and food services expanded by 364 jobs.

Other industries reliant on building and tourism also had strong job growth, with professional, scientific and technical services, arts and recreation services (i.e. tours and adventure activities), and retail trade rounding out the top 5 industries that contributed the most to jobs growth in Queenstown-Lakes. 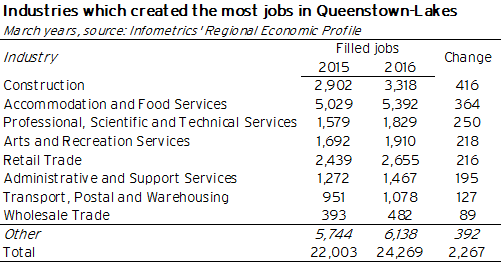 Infometrics’ small area data for Queenstown and Wanaka also shows that this job growth was evenly spread throughout Queenstown-Lakes District.

We estimate that the number of jobs in the Queenstown side of the district grew by 11% over the March 2016 year, while job numbers over the hill in the Wanaka area climbed 8.6% over the same period.

More details regarding Queenstown-Lakes District’s 2016 economic performance, as well as those of Queenstown and Wanaka will be available on February 28 in Infometrics’ Regional Economic Profile of the district (available here).

Revealing the rest of the top 10

Beyond Queenstown-Lakes, the other places with the most rapid employment growth were generally concentrated in the upper North Island. 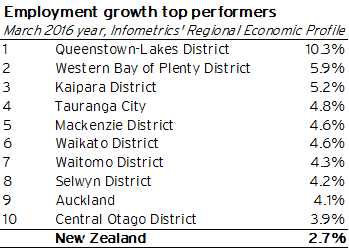 Five out of the top seven territorial authorities were located in regions surrounding Auckland, with employment growth in Western Bay of Plenty and Kaipara both exceeding 5.0%, and Tauranga not far behind on 4.8%.

Not to be outdone, employment growth was also strong in Waikato, with job numbers in both Waikato District and Waitomo growing by 4.6% and 4.3% respectively in the March 2016 year. Hamilton City, although not in the top 10, also recorded healthy employment growth of 2.3%.

It was no surprise to see significant job creation in regions surrounding Auckland, as a variety of quarterly spending and investment indicators that we follow expanded strongly throughout 2016. Furthermore, population estimates by Statistics New Zealand had shown rapid population growth across the upper North Island, for which good job prospects would have helped support.

The South Island accounted for four of the 10 fastest growing job markets. Fellow lifestyle and tourism destinations, Mackenzie District and Central Otago joined Queenstown-Lakes as being hotspots of employment growth.

Selwyn District continues to flourish as many businesses relocate and expand to the south west of Christchurch where industrial zones and logistical linkages have improved, while population growth has also remained elevated.

Mark February 28 in your calendar

We hope you have all enjoyed this sneak peek of some of the insights that are in store for the official release of the Infometrics’ 2016 Regional Economic Profiles on February 28.

This article delved into some of the upshots for employment, but remember the update will also see the release of 2016 regional data on GDP, businesses, productivity, skills, tourism, and standard of living. Subscribers to our Sector Profiles will also get updated information.

Please contact Benje Patterson (benjep@infometrics.co.nz) if you have any questions about your Regional Economic Profile or want to find out about getting similar insights for your area.