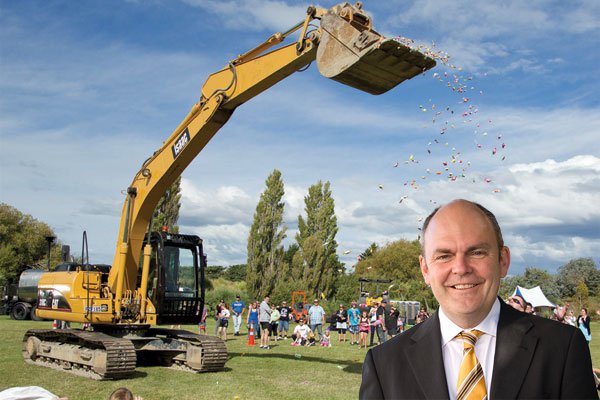 Steven Joyce’s first budget – and National’s ninth since it took up the government benches in late 2008 – set the tone for the election campaign to come, maintaining a rosy outlook for New Zealand. Although the Minister of Finance refuses to call it a “lolly scramble”, it is undeniable that New Zealand’s solid economic growth performance has left the government with the ability to start writing bigger cheques, announcing increased spending across a range of areas.

The headline announcement relating to families – in the form of rejigged tax brackets, Working for Families increases, and increased accommodation supplement payments – overshadows large investments in transport infrastructure and housing.  Before you get too excited, it’s important to note much of this investment is for already-announced projects, taking the wind out of our sails. With surpluses forecast to rise from $1.6b in 2017 to $7.2b in 2021, the Government is clearly able to splash out on new capital items.

When asked about possible future capacity constraints regarding increasing infrastructure spending, Mr Joyce noted the need for continued skilled migrant inflows as the economy nears full employment, with sustained growth in both new trainees and returning workers to capacity-constrained sectors also important to ensuring infrastructure work could go ahead.  The Minister also ruled out taking advantage of low interest rates to borrow more and further increase spending, and he is instead focused on reducing net debt to respond to shocks in the future.

Buried under the Family Incomes Package of $2bn per year is an announcement of $4b in new capital investment in 2017, with the total capital injection over the 2017-21 period reaching $32.5b.  Although these figures sound impressive, we’ve explored the details and found that most of the funding is taken up with spending that was already announced, with little in the way of new infrastructure projects.  The Minister has spoken today of coming announcements about new public-private partnerships, but today’s Budget appears light on new details for transport infrastructure. Given the increasing population and need to build more housing around the country, the need for additional infrastructure is high, and much of this work is likely to fall outside the scope of the Housing Infrastructure Fund. Significant new announcements will need to be made – and soon – to keep pace with the increases in population over the medium term.

Today’s budget also seems to continue John Key’s modus operandi of oiling the squeaky wheel, with the government responding with funding to several areas where their critics have hit them hard in recent months. The $224m increase to mental health comes on the back of numerous calls for better funding for a sector under pressure, similar to school operational grants, where teachers’ unions and others within the sector have been calling for greater funds to keep up with roll increases. Nevertheless, the increases announced today – both around services and the provision for more cash in hand for workers – make for an attractive enticement in the lead-up to September’s election.

We’ve explored today’s announcements to break down this increased spending and what it will mean for different sectors.

The government has tagged $9.2b for state highway capital spending over the next four years, including $812m for repairs to State Highway 1 between Picton and Christchurch after the Kaikōura earthquakes. Auckland captures the lion’s share of funding with the Western Ring Route, improvements to the SH1 corridor both north and south of Auckland, and the East-West Link all noted as core projects.

Several other major centres will also see some of this funding, with the Huntly and Hamilton sections of the Waikato Expressway, Peka Peka to Ōtaki Expressway, and Christchurch Motorway extensions also in line for funds.  The government’s public-private partnerships for Transmission Gully and Pūhoi to Warkworth projects have also been identified as key projects.

The budget sees a considerable increase in funding for rail, with $548m over the next years. KiwiRail gets the bulk of this money, with $450m allocated by 2019.  This total includes funding to get the South Island main trunk line back up and running, with the government also announcing it will review KiwiRail’s operating structure and ongoing funding needs later in 2017.

The rail funding also includes the Government’s formal announcement of Tranche 1 of funding ($436m) for Auckland’s Central Rail Link, as part of the 50% share of the project’s $2.8b-$3.4b cost. Wellington also attracts some of the rail funding, with $98m to overhaul the metro network to increase reliability for the Hutt Valley, Melling, and Johnsonville lines.

The government has announced an extra $100m for surplus crown land to be utilised for new housing projects.  Most of this allocation appears to be in Auckland, with some of the land that is expected to be freed up already earmarked for Housing NZ developments in the region.

Announced prior to budget day, the $2.2b Auckland Housing Programme outlined by Social Housing Minister Amy Adams seeks to add 34,000 extra houses over the next decade, though 8,000 of these will come from current conversions of Housing NZ assets.  The government has also provided an update on the Housing Infrastructure Fund announced in 2015 by John Key.  Projects submitted to the Fund are currently being evaluated by the independent panel, with announcements due to be made at the end of June, and the government expected to enter into funding discussions with successful councils by the end of this year.

The social sector gets a massive boost in today’s budget, with increases to both operational and capital funding. Funding has increased for disability services, ambulance crewing, family violence, and school operational funding, among others. However, it’s important to note that much of this spending is a delayed response to population pressures. With net migration running at record highs, much of today’s announcements merely pay for increased demand pressures over the last few years.

Education receives a $392m boost in capital spending over the next four years, with $240m of this money allocated to Auckland.  This funding allows for four new schools, one school expansion, and around 300 new classrooms across the country, and is in part a response to the growing population placing strain on current schools’ capacity.

Significant increases in the prison muster in recent years have led the government to announce a $763m capital injection for the Department of Corrections to provide additional prison capacity. Much of this funding will be used for the previously announced 1,500 bed facility to be built at Waikeria Prison.  Correspondence with the Department of Corrections indicates the prison muster is expected to remain above previous forecasts, with over 10,000 prisoners recorded in January 2017.

The health sector is getting a boost to the tune of $2.4b to extend existing facilities or replace old facilities across the country. Notably, the South Island will see a large amount of this funding, with $535m for Christchurch Hospital, $77m for Grey Hospital, and $22m for urgent works at Dunedin Hospital.   Middlemore Hospital in Auckland has also been allocated $53m to replace its mental health facility, along with $14m for the Mason Clinic, which deals with mental health patients.

Irrigation expansion is also on the cards, with $63m announced for Crown Irrigation Investments Ltd to invest in the construction of water storage projects across regions.  The government’s aim is to build irrigation schemes that are sizable enough to significantly affect agriculture in the regions.

The previously announced $102m capital injection for tourism infrastructure – including public toilets and freedom camping areas – via the Tourism Infrastructure Fund will alleviate some concerns about the need for central government to return more funding to local councils to deal with the rapidly expanding tourism sector.