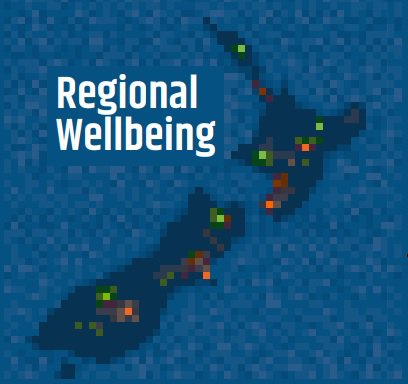 “Wellbeing in provincial New Zealand is lagging urban areas,” says Infometrics Senior Economist Brad Olsen. “Although some aspects of wellbeing are improving across the country, indicators such as the suicide rate are deteriorating, with over 600 deaths in 2018. Government actions have failed to assist local communities in addressing their specific issues, despite these challenges having been present for many years.”

Wellbeing in the metropolitan centres exceeded wellbeing in provincial New Zealand for seven of the nine domains examined by Infometrics: Environment, Health, Jobs and earnings, Knowledge and skills, Income and consumption, Safety, and Social connection. A greater mix of skilled employment opportunities, office-based work, and higher pay available in urban areas explain part of the urban-rural divide. Urban areas are also safer places to live, with a lower crime rate one of the factors behind this result.

At a regional level, Wellington’s wellbeing outcomes are among the best in the country, with the region scoring at or near the top for six of the nine wellbeing domains.

Both Northland and Gisborne feature near the bottom in most of the wellbeing domains. A significant proportion of allocations from the government’s Provincial Growth Fund to date have been towards projects in these regions. However, Infometrics’ analysis suggests there are wider societal issues that will not be addressed by the Fund’s current focus on jobs. Broader social policy initiatives are needed to prevent further declines in provincial wellbeing.

The importance of understanding regional wellbeing stems from its emphasis on outcomes for people and communities. Having objective measurements of wellbeing enables a robust assessment of progress for local decision-makers.

“Often when wellbeing is being discussed, it is only considered at a national level. But nationwide figures ignore the very real and significant differences in wellbeing for people in different parts of New Zealand,” says Mr Olsen. “Our Wellbeing Framework highlights key issues for different communities, enabling informed choices about where efforts should be focused to achieve wellbeing improvements.”